Hi, my name’s Ali, I live in West Yorkshire, England.  I love doing anything creative but for the past few years all I’ve done with my spare time is play golf.  I do tend to have quite a lot of ‘me’ time – I’m a paramedic and work shifts, and have the best job in the world!

Although I love my golf I don’t really have a lot to show for all the effort I’ve put into it, except for a few trophies, and a single figure handicap.

In  June 2013 it was ‘Captain’s Day’ at the Golf Club, so I decided to make a frock to wear.  Not having sewn any clothes for at least 12 years I was cutting it a bit fine when I started my project on the morning of the night I wanted to wear it.  After chasing the fabric across the carpet for 3 hours (it was an ITY knit) I was able to start sewing.  I had it finally finished by 6.15pm, quick shower and off I went……………….

So, since June ’13 I have really gotten into the crafty/creative malarky.  I’ve learnt to crochet, made all my Christmas pressies in 2013 and then in 2014 I joined the RTW (ready to wear) Fast, organised by the amazingly talented Sarah Gunn over at Goodbye Valentino.

In 2014 I stopped smoking as well as rising to the challenge of the RTW fast – not sure which was the hardest!   There’s a round up of my me made of 2014 wardrobe here.

In 2015 I organised my first ever bloggers meet up in Dewsbury and formed the Yorkshire Spoolettes. 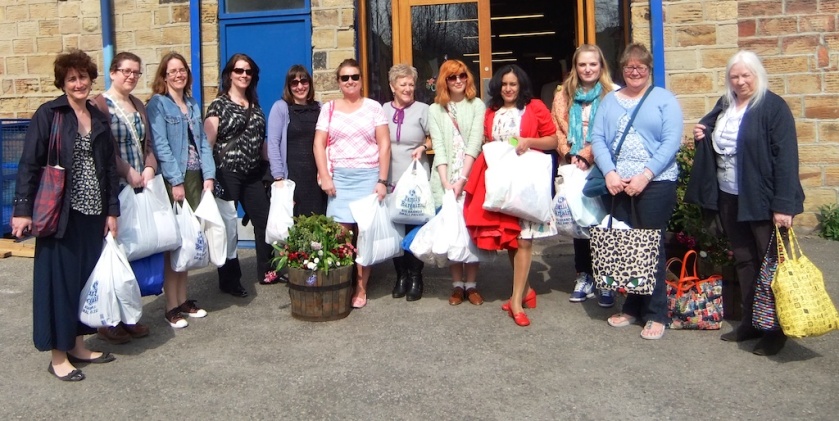 You can read about the meet up and other goings on from the Spoolettes HERE.

2016 saw me trying to improve my sewing – and aiming for quality not quantity. And also trying to make more wardrobe staples as I do have an awful lot of orphans in my wardrobe!

I’ve invested in a Babylock Ovation and am hoping to make me own active wear.  In 2016 I also attended Sewbrum and Sew Up North, and went to the Big Vintage Sewalong Afternoon Tea Party.

It was quite a busy year and I’ve met some lovely sewing folk in real life as a result of my blogging.

In 2017 my sewing slowed down as I focussed more of my time on become a healthier and fitter version of me.  At the start of 2016 I weighed in at over 13 stone.  By February 2017 I had lost almost a stone,  mainly by becoming more active.  I then joined Slimming World as i was struggling to loose the last stone and a bit.  I hit my target of 11 stone in just 3 1/2 months.  I’ve written a post how I was able to rescue some of my favourite clothes to fit my new figure.

My dad thought of the name “Thimberlina” for my blog.  And the name’s stuck.  My mum will ring me up and ask what Thimbers been up to, and hardly ever calls me Ali!