Remember the ARRRHHHHHH moment in the first installment? I eventually pulled myself together, and several deep breathes & days later I had a plan.

I unpicked the sleeve head (shown by the orange highlighter), and added another piece of fabric – stitching along the yellow highlight. I inserted a small tab which matched the interior of the coat.

I prefer this the “uncut” sleeve head. It adds a RTW feel to it. So really it was a blessing in disguise cutting the hole, and character building too!

Here’s some more pix of the Albion:

As you can see I used the same fabric as the bias trim for the inside yoke. I used the method as per the instructions (which i think is the burrito method), but had to unpick my first attempt. The lower piece of the back ended up inside the yoke not outside. On the 2nd attempt I took things more slowly and it was ok. 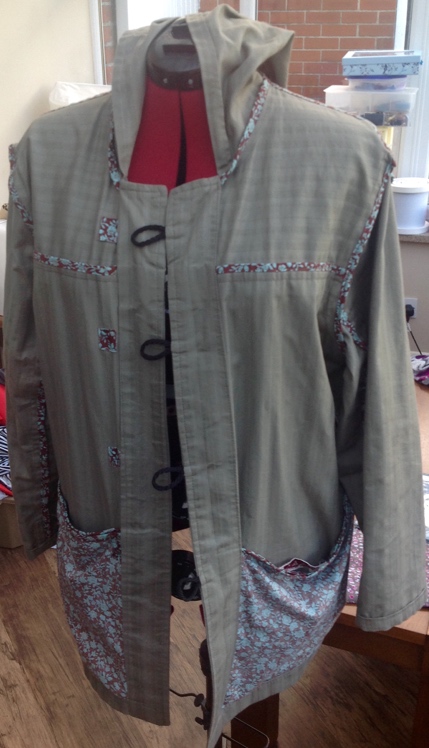 I spent ages and ages with the pocket linings to make sure the right side would be shown on the inside of the jacket, but as you can see I failed miserably!

The fail on the inside meant that from the outside the inside pockets do look better!

This shows how I reinforced the fabric where the buttons were sewn on. This was my idea and not in the instructions. I used the bias binding and cut it into little rectangles and interfaced it. I sewed it onto the jacket prior to sewing on the buttons. The stitching shows a little bit on the front, but is mostly behind the buttons.

I machine stitched the buttons in place. I removed the foot from my machine and just used the base of the thing that the foot is fastened to. (sorry having a blank moment and can’t think what it’s called! The Buttons were recycled from an old Betty Jackson cardigan, but there were only 4 so I needed to find 2 more for the cuffs.

I have a fairly big button stash which I inherited from my mum in law. This is a selection of single ones with the occasional pair. I used the 2 black buttons on the mid-left. 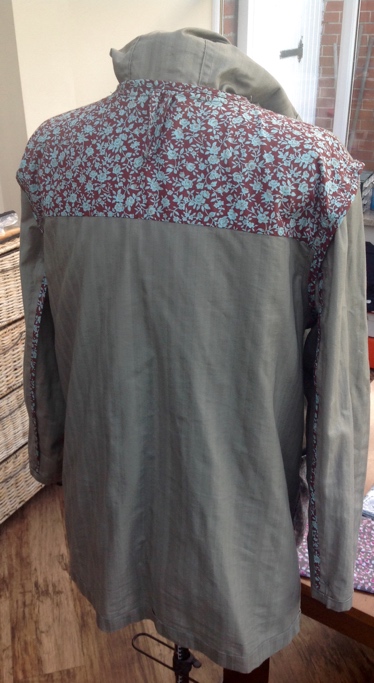 View of the back. Not sure if you can see it but I added a loop from bias binding to use for hanging the jacket.

for the loops I bought a length of cord and followed the instructions to make them. It was just a case of folding them in half and zig-zagging the ends together. The trim on the front of the jacket do match up, they look a bit off on this photo. 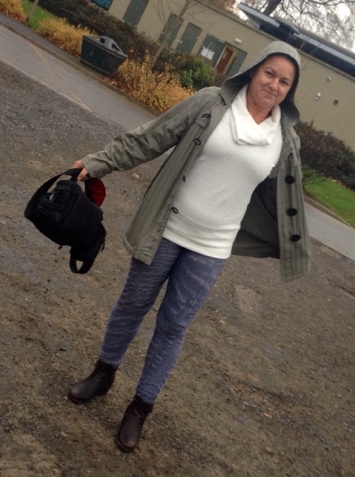 My jacket in action after a walk around Shibden Park (its a beautiful place, but I only have photos of me in the carpark!) Worn with leggings, blogged HERE, and my Sewaholic Renfrew (unblogged).Think I need To learn to breath in when twirling. 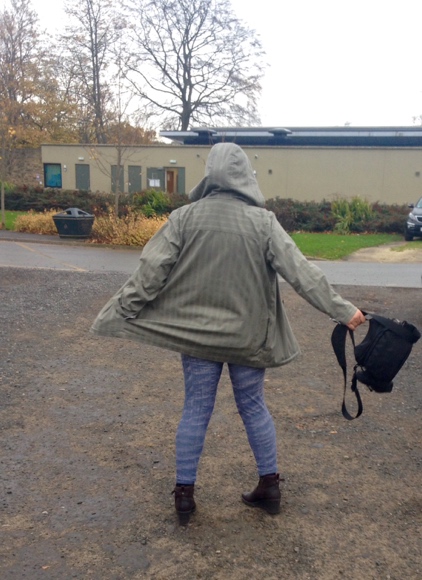 the back view. don’t know why I’ve got my hand stuck in my pocket!

This is the best casual jacket I own, but also the most expensive.  When I was 3/4 of the way through making it I ran out of thread (soooo much stitching to do – buy 2 spools if you intend to make the unlined version).  I called into Boyes in Brighouse, about 7 miles away, for a second spool.  On the way home I had a bump in my car (my fault) which ended up me paying an excess of £400 to the insurance company!! Hence the very expensive coat.

It’s not put me off it though.  It’s roomy enough to wear a thick jumper underneath, but looks equally good withjust a thin top underneath.

I’ve lost count of the number of  “No! You didn’t make that!?” moments that I’ve had.

Not including the cost of my car, and the pattern, this jacket has cost about £20-25 to make (I used 2.5m @ £7/m), but I think something similar would be at least £70 in the shops, maybe more, I’ve lost track of what things cost since I’ve joined the RTW fast this year.

If you’re considering making one, don’t go for the unlined version if you want a quick make!  I think the lined version would be much quicker.  Also, if you have internet access when sewing and  are thinking of buying the sewing companion I’d save your money and use the sew along instead, unless you’re a complete novice.

I’m on the lookout now for some fabric for my hubby.  He’s seen a similar jacket in John Lewis for about £120 in a mustardy yellow soft twill.  I’d also like to make myself a waterproof version, maybe in some funky laminated cotton.

What are you making to keep you warm? Are you joining in the monthly stitches challenge – outerwear…..?