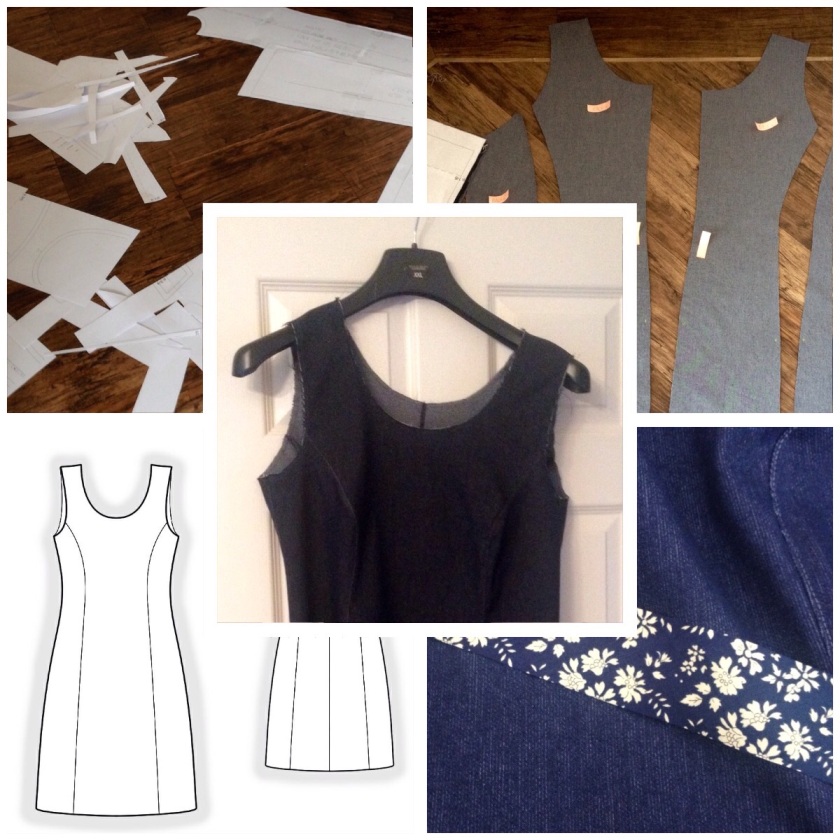 Yesterday I really needed to sew! I’ve not made anything since the 30 draw string bags, and before that was the GBSB Drapey dress (unblogged as yet, due to being a failure!).

It needed to be something that didn’t require a muslin.  My sewing soul was in need of some fairly instant gratification, so I decided to make up the Valentine dress in some stretch denim I’d bought (originally for the ginger jeans, but seen as my 2 pairs of jeans fit well, and despite printing out the pattern, buying the fabric and notions, the Gingers have been pushed down the list!).  I’d bought 2m of stretch denim online from Minerva.  It has polyester in  it which I think has made it ideal for this dress as it will crease less than if it was your 97% cotton 3% elastine type of denim.

But oh no! I tried on the Valentine dress to check the fit and its a bit too big! (Oh yea for shrinking body!)  My measurents haven’t changed since Feb, but I have lost about 4lbs which must have changed some unmeasurable part of me!

So, I had a quick look on the Lekala website and chose this fairly simple dress with princess seams:

I was fairly confident that this would fit without a Muslin, but could make any necessary tweaks easily if needed with the princess seams. It calls for a zip in the centre back seam, but as the denim is quite stretchy I thought I’d risk leaving it out  – the pattern calls for un-stretchy fabric.

Once I’d cut out all my pieces I labelled them with some mini post-it notes.  I don’t usually do this, then later I end up wasting time trying to work out which piece are which, and having to get out my pattern pieces back out.  This is definately the way forward for me, though next time I’ll go with the full size post-it notes as the mini ones lost their stickiness as the sticky area is only small.

I sewed all 7 pieces together before I tried it on, and YES it fit!  Result! As usual the use of pins was minimal – I only pinned the notches and the end of each seam.   I’ve bought 3 of Janet Prays Craftsy classes and now can manage most things without much pinning, which really speeds things up!

I decided to top stitch all the seams using the grey top stitch thread I’d bought to topstitch my Gingers.

I set my stitch length to 3mm, I wasn’t sure what the norm is for this but it looked ok so I went with it. It was a bit tricky manoeuvring the fabric as the whole dress was stitched together. At least next time, now I know it fits, I can topstitch the back and front seams before I sew the side seams together.

I’m  now undecided about finishing off the neckline and arm holes (can’t spell their proper name!!).  I have 1/2m of some Liberty which matches perfectly, but don’t know wether I should have it showing or not.

I bought this Liberty as a Remenant on eBay from Truro fabrics last year and have been waiting for the right moment to use it. It’s good to know ‘the right moment’ will  come along eventually, so my stash will all be used up one day!

So what do you think? Bias trim on the inside or out? I can’t do anything yet as the family are still in bed, but hopefully they’ll be awake soon.  Would it be wrong of me to start vacuuming before breakfast on a Saturday morning?!