Here’s a quickie (with quite a few piccies) about how me and my new assistant O are getting on.

Anyone who knows me in ‘real life’ will know I’ve a bit of a thing for instruction manuals.  It drives me bonkers to have something and not know how it works properly, and what all the different functions do.  (hence the hubby still can drive me crazy as his mum lost the manual I was supposed to get when we got married!)

So when O arrived I was super excited, had downloaded and read the manual more times than I could remember and felt fairly confident that I could jump in feet first and make something. 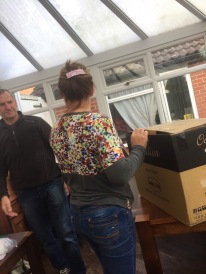 Instead I cut some strips of fabric and started from the beginning of the instruction book and began working through the different stitches. 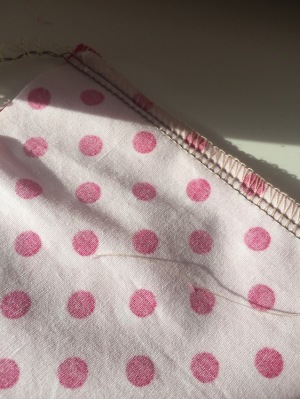 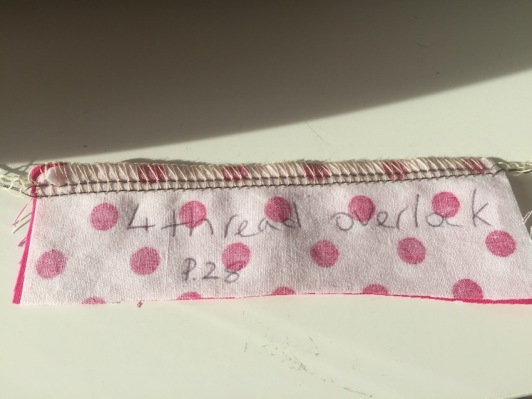 As I practiced each stitch I wrote on the fabric what the stitch was, but soon thought this could get a bit disorganised so stuck them onto paper using a regular glue stick. 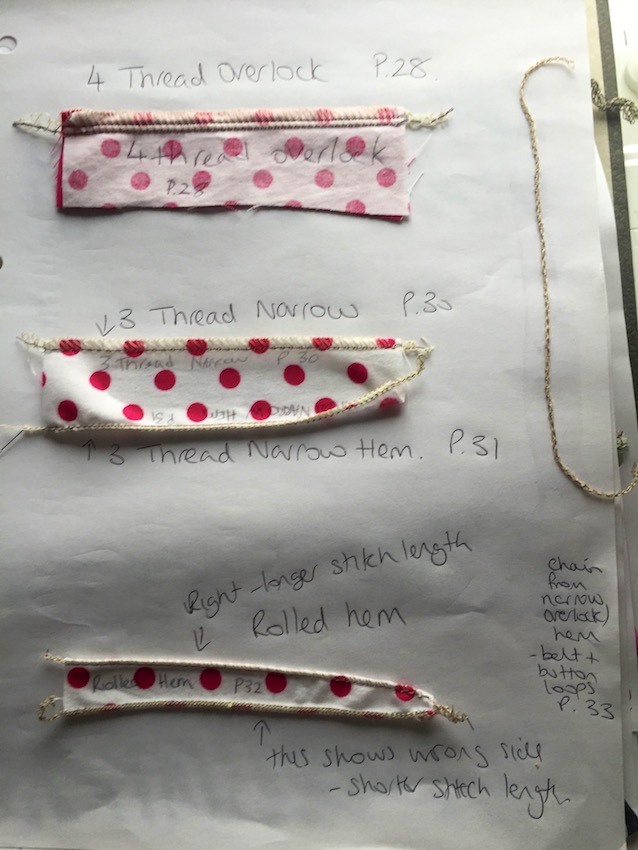 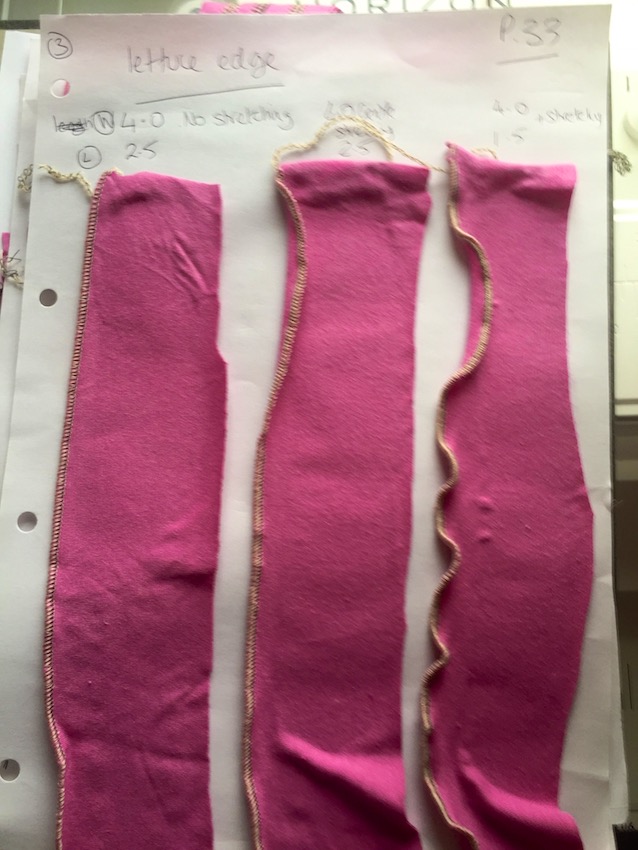 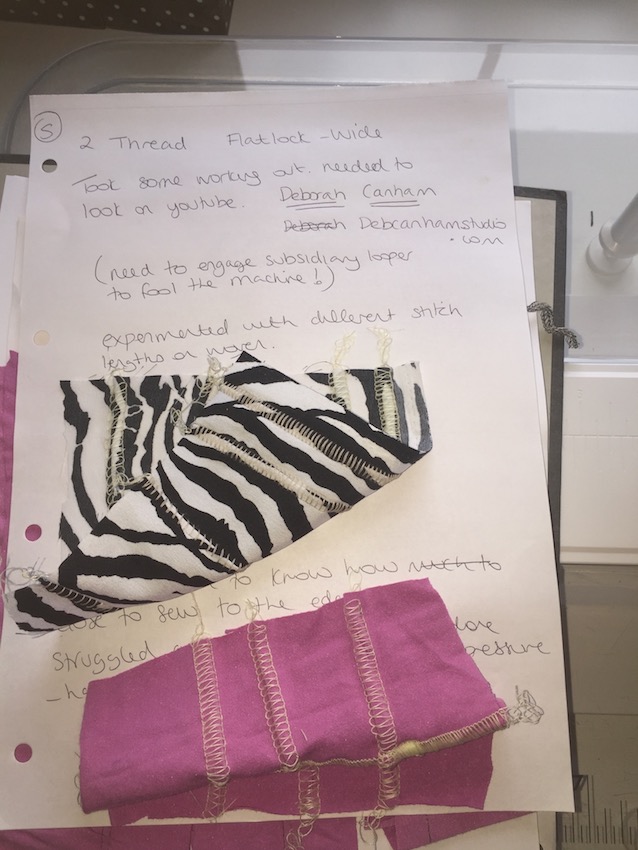 I was able to write notes on the paper if needed, the type of stitch and which page to find it on in the manual.

I tried different fabrics for different stitches.  It got me used to how to thread up the machine in no time.

Although I hadn’t worked through everything in the book I really wanted to get going and make something.  So on day 2 of owning O I made a Renfrew.  Something I’d made lots of in the past, so no fitting issues and no tracing patterns off.

I made it all in an afternoon. It took a bit longer than it would have using my old machine, but I was soooo pleased with my new make.   I nearly didn’t bother using my sewing machine at all, but decided to stitch in the neck band with a narrow zig zag then finish it off with the cover stitch. 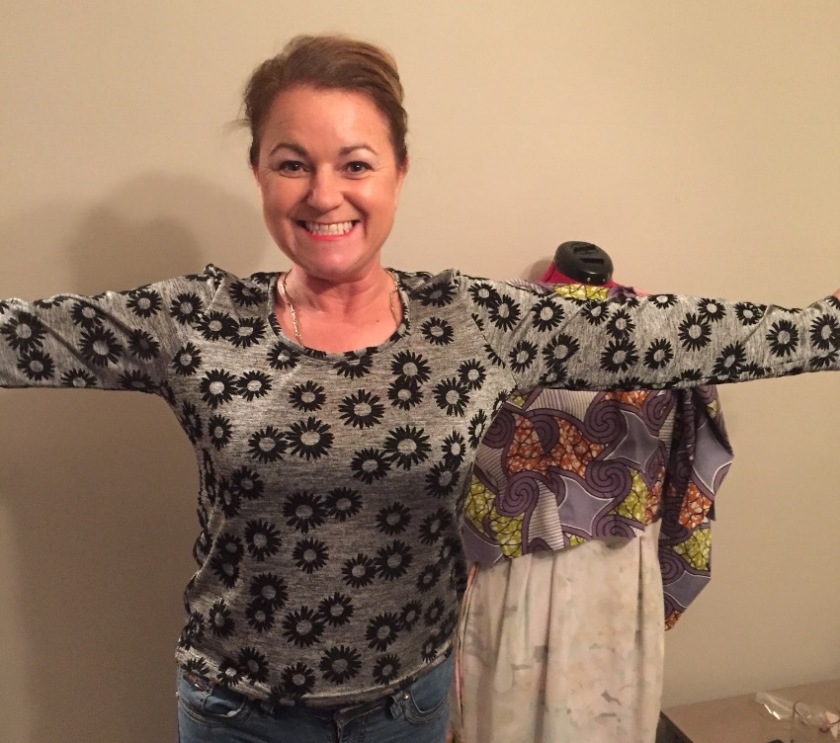 Next up was to ‘fix’ Sue’s dress  (if you follow my Sunday Sevens you’ll know what I’m talking about).  It had huge bat wing sleeves that needed to go as they were ridiculously unflattering. So the batwings were chopped off (which was a lot easier than getting ring of bingo wings!) and all that was needed was a simple rolled hem.   As I’d practice rolled hems I didn’t think it would be much of a job for O. 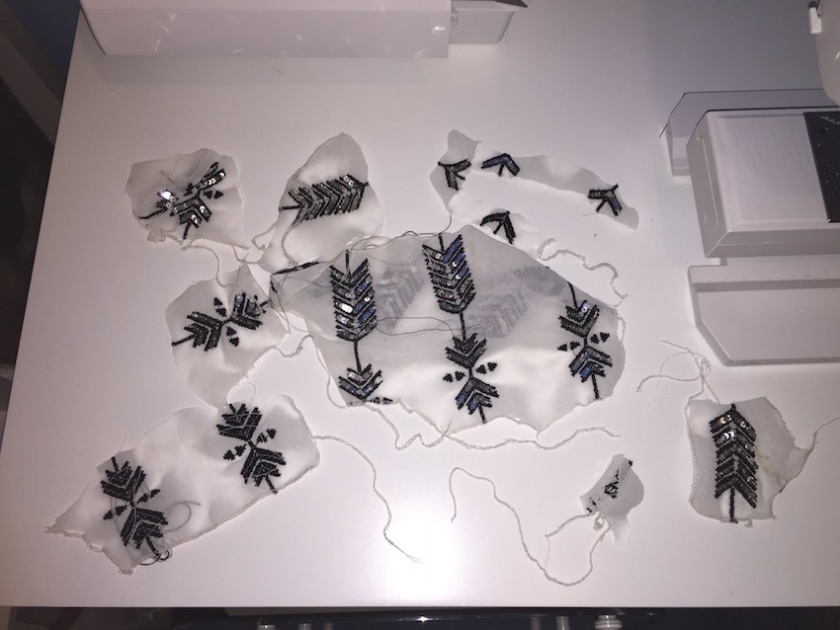 Luckily I had the wings which had been removed which I could practice on.

And practice I did!

I tried different rolled hems but found the same problem – all the stitches were coming away from the fabric.

Eventually i had a brain wave and chose a fine needle.  Problem solved!

I was really careful when I was deciding how much to cut off as I didn’t want to have to remove any of the sequins or sew through them. 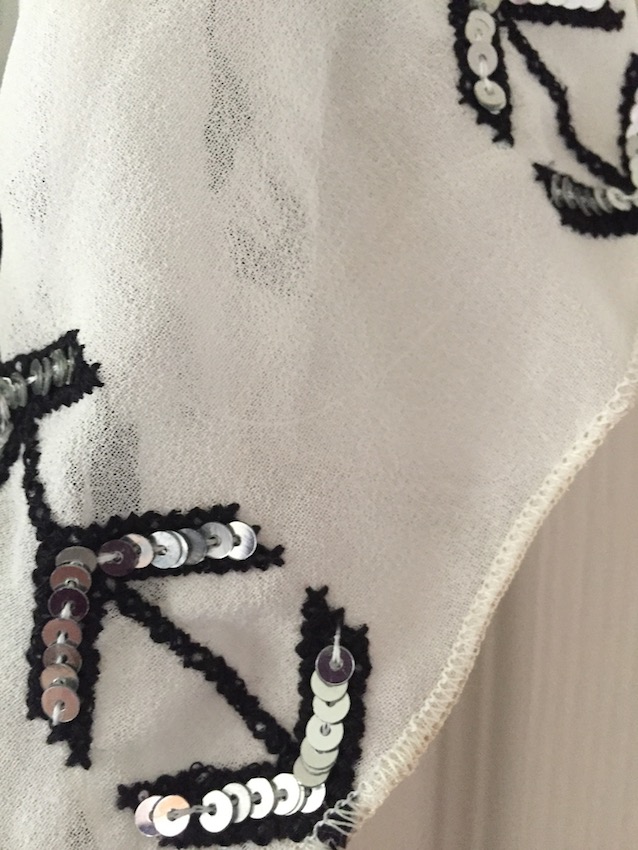 After playing around with O for a couple more weeks I was able to change between coverstitch and overlock in 5 minutes or less.

So I decided to whip up another simple jersey top.  Hila had measured me up from top to bottom and I had a big sheet of my measurements so I could start to learn to make my own blocks.

Linda had recommended I buy Winifred Alrich’s book – Metric Pattern Cutting for Women, after seeing all the work I put in to the numerous muslins i had to make to get a good fit.  She assured me it would be much easier if I made my own patterns.  I downloaded the electronic version straight away to my kindle!

So the first one I tried from the book was an easy fitting jersey tee.  Making the block seemed to take less time than tracing off pattern pieces.  It was just like playing dot to dot on a bit sheet of blank paper.  I bought a cheap A1 flip pad from Staples, and keep it under the sofa in the lounge so it doesn’t get bent or creased.

I made a turtle neck top – I knew exactly what the neck circumference of my top was, subtracted 15% and added seam allowances – 3/8 ” – and it worked like magic!

I admit to sewing in the neck and the arms first with a basting stitch on my sewing machine just to check the fit, and also it was a bit tricky sewing the neck hole in the round and getting the stretching just right.

The top took me longer than I thought it would to sew up.  I struggled a bit with the fabric – it just didn’t feed smoothly through the machine at the beginning of the seams when overlocking.  It was quite a fine stretchy knit.  I even tried stitching a piece of elastic to use to help start it off.

I’ve put a piece of the fabric in my bag and I’m going to take it to the Babylock stand tomorrow when I go to the Knitting and Stitching show in Harrogate and hopefully I’ll find out where I’m going wrong.

I’m really chuffed with my first attempt at pattern drafting, and can’t wait to make some more of these for winter.  I think I’m going to buy Tilly’s new pinafore pattern tomorrow at the show as these would look fab underneath it.  And I’ve got some grey denim which would be perfect!

Just to mention, the sleeves are 3/4 length on purpose. I’d have preferred full length but didn’t have enough fabric! 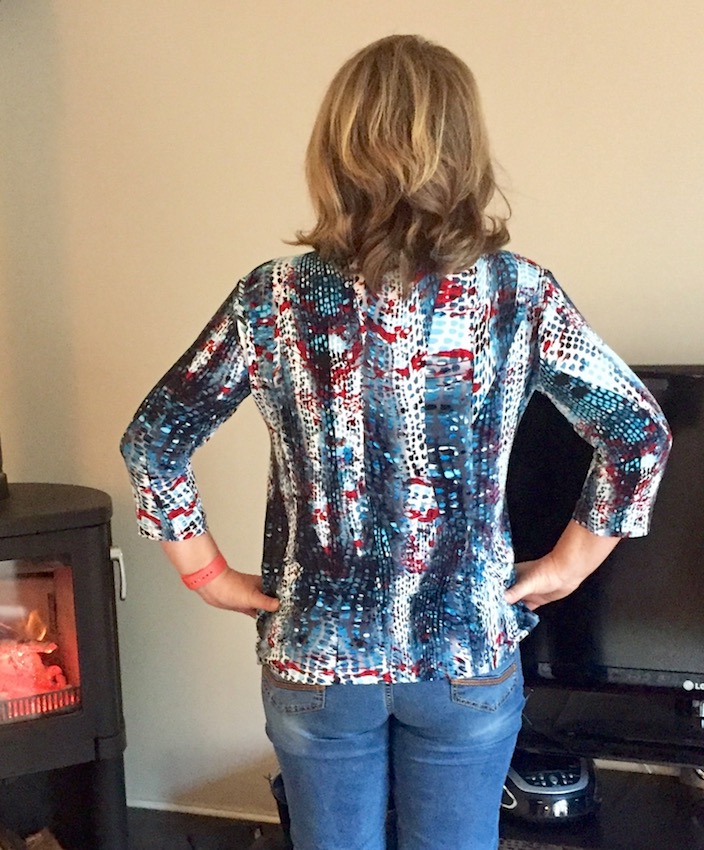 The fit is more relaxed than I thought it would be, but I think it’s due to the stretchiness of the fabric.

And look at it under my new jacket!!

As well as taking the print off my manual with all the heavy reading, I’ve found loads of help online too.

Babylock have their own chanel on You Tube HERE which I’ve referred to loads, and there’s also Sewing with Nancy which I’ve found really helpful.

Something else which I’ve found invaluable is a group on Facebook group called Coverstitch/Coverlock.  Its for owners of all Coverstitch brands and was recommended to me by Peggy from Bespokeability.  There’s questions being asked and answered all the time.  It’s been really informative as i’ve read the solutions to problems before I’ve encountered them!   It’s a closed group, and you need to request to join.

Next up is to make some active wear.  I really need some new sports bras but I think thats a bit adventurous at the minute.  I’ve already made the block for close fitting jersey wear with negative ease, so hopefully i’ll be able to make some gym tops fairly soon.

As much as I could waffle on, I won’t.  I need to get my frock and whatafvyer ready for the Big Vintage Sewalong’s afternoon tea party tomorrow!

Eeeek!  I’m just rather slightly giddy!!  Are you going?  Or are you going to the show?

It’s my first time going to anything like this and i’m not sure what to expect, except it’s likely I’ll be coming home with a few big bags all being well and an empty purse!