If Carlsberg did Sunday Sevens they wouldn’t be like mine, they would be like the week Sewchet’s just had!!

Anyway back to my week (but click on Sheila’s link if you want to see how a week in England is really spent when the sun is shining!).

1. H had a match for Yorkshire and scored 44 – his highest number of runs for them this season.  He was shattered on the way home and fell asleep.

It was about 4:45 am and I was heading into Huddersfield, returning back to area.  I saw the most amazing sunrise.  I pulled over and took a photo.  As I looked in my wing mirror, before setting off, a car over took me.  Then 2 cars racing each other about 60mph in a 30mph zone came flying past!  After they passed I set off and about 200yds down the road was confronted by a smashed up VW Golf – one of the cars that had just flown past!  Luckily the occupants were ok, but the car was a proper mess!  Thankful I’d pulled over to take this photo otherwise I could have easily been involved in the accident. 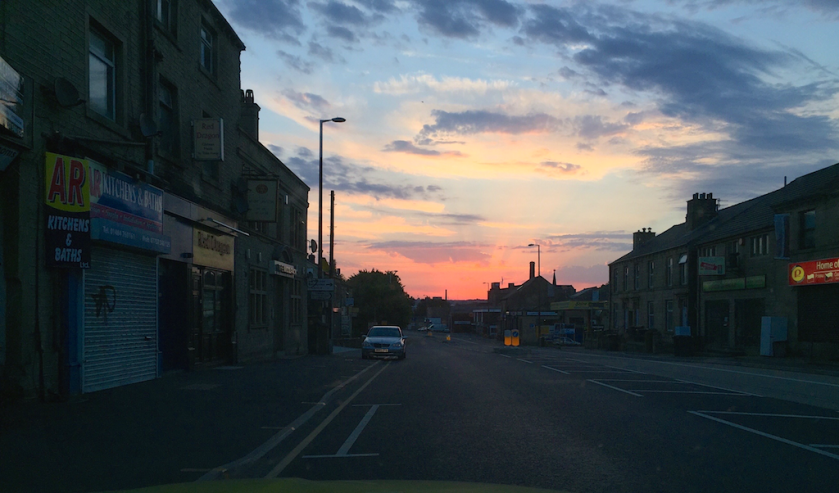 3.  Didn’t sleep too good during the day.  It was so hot and there was a bit of commotion next door/ I opened the curtains to see what was going on.  A digger was almost horizontal!  they sorted it out in the end – luckily no casualties! 4.  The ceiling has been re-plastered and painted in my mums kitchen. In the Feature pic dad’s sorting stuff out under the floor boards and I was helping measure the ceiling for the new lights.

5. Played my club knock out at golf…. lost ;-(    Lots of poppies at the side of the pond this week, more purple ones and a red one had flowered too. 6.  Twice this week we’ve managed to have a pretend BBQ on the electric grill, and eat outside! 7.  A rare treat today a Cricket.  Rain stopped play, but Claire (one of the other mums) brought Pimms so we retreated to hubby’s van to drink it!  I didn’t know until it was too late that she had laced it with vodka.   Naughty friend!  By 5pm I was tipsy. By 7 I was really tipsy.  At almost 10pm I’m just about able to write this post!

We had to use my crochet hook to stir the drinks!   Luckily the sun came out, play was resumed and we won! Hope you’ve all had a lovely week in some shape or form.   I’ve not sewn as much as I’d have liked to this week, and I’ve had problems connecting with WordPress on my Iphone so am a bit behind with my blog reading.   Has anyone anneals had trouble reading blog posts using the WordPress App for iPad/Iphone?

If by some strange wonder you’ve not heard of Sunday Sevens, it’s the brain child of Natalie over at Threads and Bobbins.  Head over to see hers, and find out more.

Fancy joining in? ….The first couple of weeks are tough but it’s surprising how it opens yours eyes to what you do day to day when you need to show everyone 7 photos at the end of the week! And it does get easier, I often end up with 9 or 10 photos and have to try and narrow it down!