Yay!  At last!! I finally get round to showing you a special gift I’ve made.  I’ve been hanging on as I was hoping to get a pic of this toiletries bag in the middle of the sea in some unknown place on a submarine! I’ve not got it yet but hopefully I’ll be able to show you soon and will add it to my Sunday Sevens.

One of my work buddies partner is in the Royal Navy and will be away for his birthday in a submarine.  When was racking her brains as what she could buy him and I came up with a personalised toiletries bag.  She looked a bit grief stricken as if she should make it, and was quite relieved when i told her all she had to do was email me some photos and I’d do the rest.

Here’s the photos printed off onto special photo transfer paper.  I bought mine from WHSmiths – 5 sheets for £10 but I’m sure you could find them cheaper on Amazon.  I used 2 sheets (A4 size) then cut them out leaving a big extra around the edges.

Make sure you reverse all your photos, especially if there’s writing!

I forgot with these, so couldn’t use them for the actual bag but did use them to have a practice with.  So If you’ve a bit of extra space on your page it would be a good idea to print an extra picture so you can have a practice.

For the bag I was using some stretch denim from my stash and luckily I had a zip that matched perfectly too.  I bought the denim from Minerva but looking at their site it appears to have sold out.

I looked back on the Boxy Dopp Kit I made for Martin and re-read the tutorial from Cottage Mama as I wasn’t sure of how big to make it.

Lindsey suggests using pieces of fabric 13″ x 14″ inches.  I made mine slightly bigger as I had quite a lot of photos to fit on!  Instead of using light weight interfacing I used some quite thick sew in interfacing as it was all i had in. I used the same fabric for the inside as the outside.

I followed her instructions.

After inserting the zip I sewed in Gemma’s messages inside – before the bottom and the sides were sewn up.

In the past I’ve used Bondaweb but this time I just pinned then zig zagged around the edges. 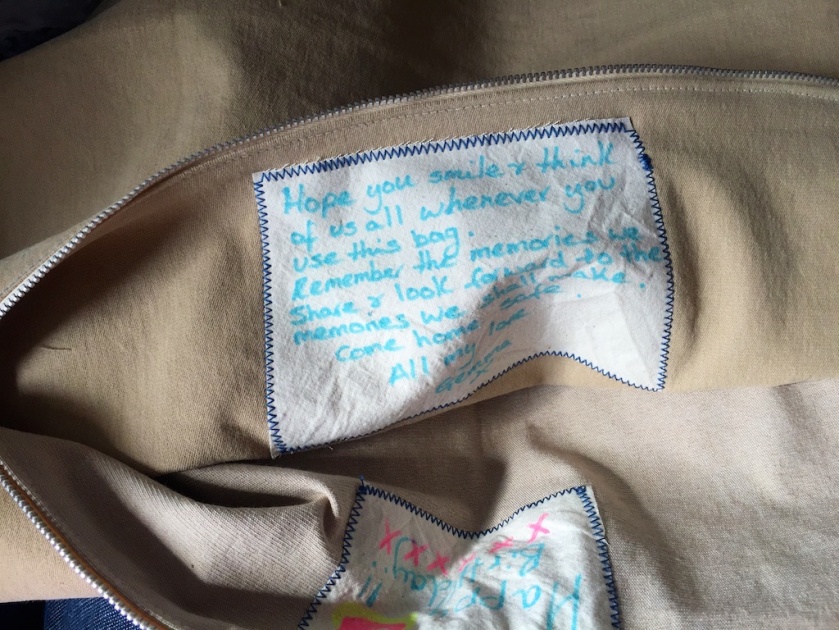 Next up I added the photos.

Once I was happy with the placement I ironed them on one at a time.

And the other side!

It took a bit of guess work as to where the edges of the bag would end up but it all turned out ok. 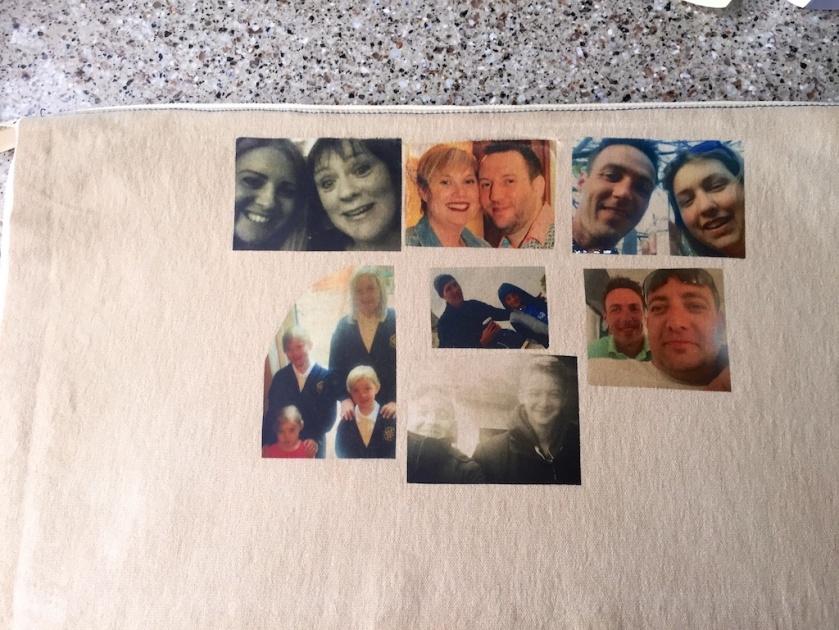 Once the sides were stitched up it looked like an odd shoe bag with the zip down the centre.  The bag was turned inside out and the corners stitched and trimmed off. 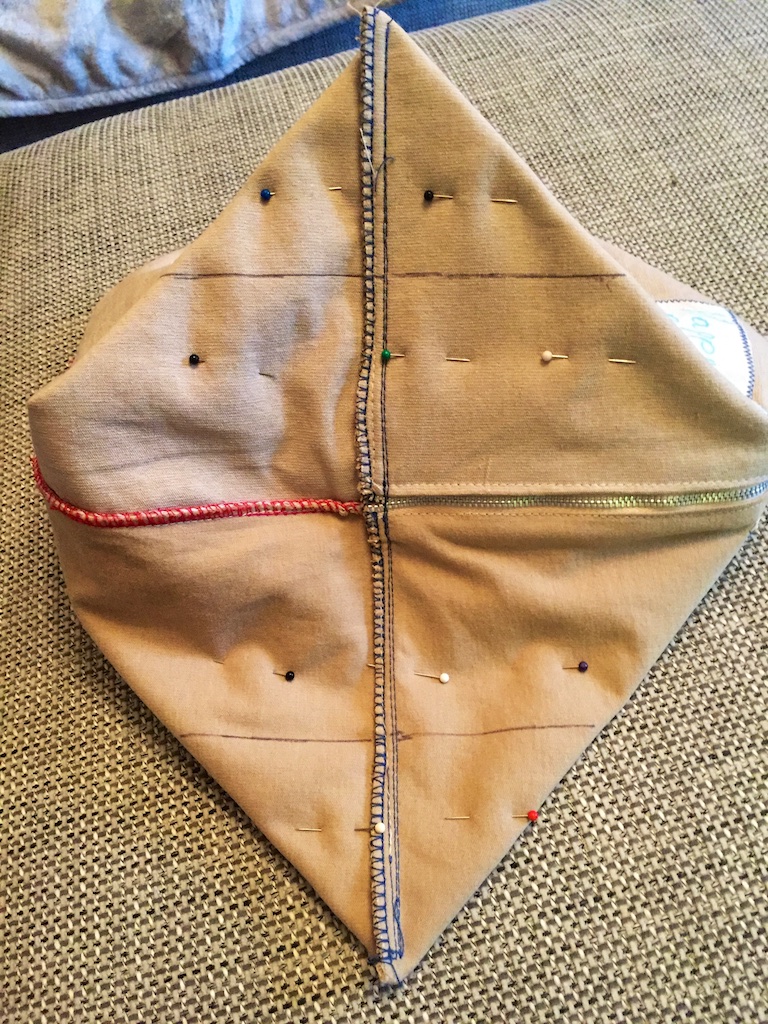 For the first couple of seams I finished them off using my overlocker.  It had quite a few layers to cut through in parts and wasn’t too neat.  I changed to using the overlocking stitch and special foot on my Janome and was happier with how in looked. 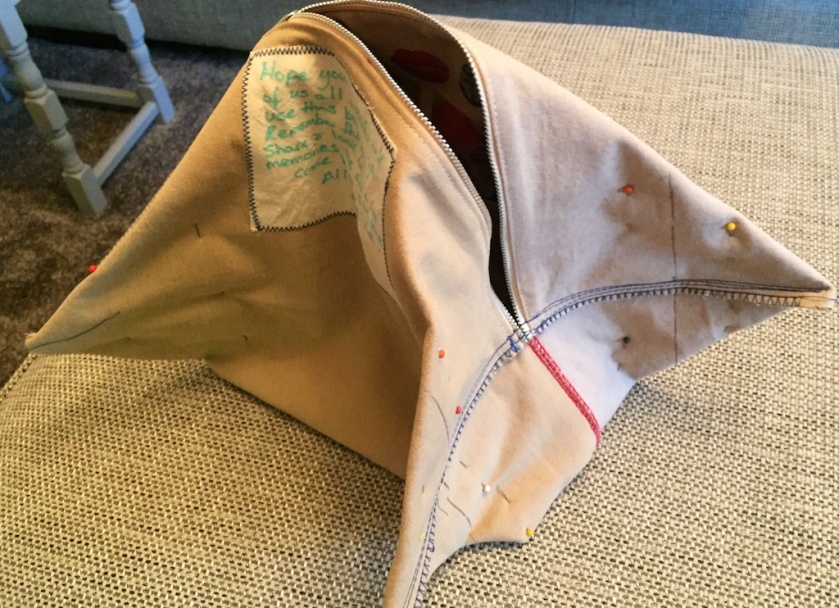 Gemma was over the moon with it!  It’s been posted off and he received it a couple of weeks ago when they ‘came alongside’ (new navy phrase I’ve learnt) in Gibraltar.  He’s saving it to open on his birthday, which was last Sunday.  She’s not heard from him yet though so he must be in the middle of the deep blue sea with no Wifi.