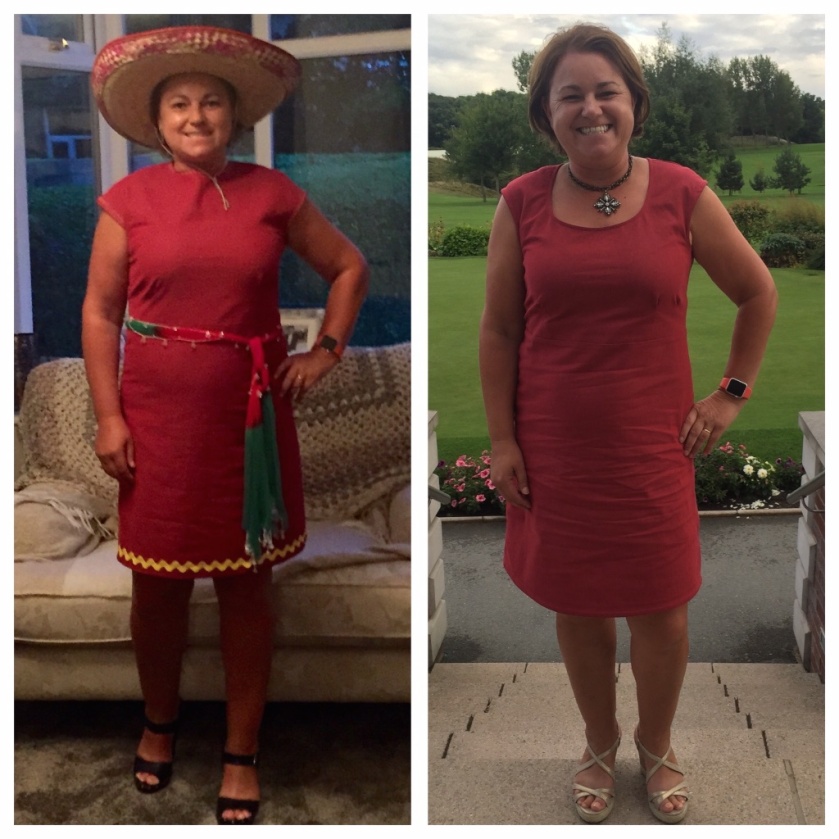 Well it’s one frock really, but due to it being far too tight and having giant ric-rac on the hem it was in need of attention before I could wear it publicly.

Remember the Mexican party we went to? It was over the back holiday weekend in August which now seems ages ago.  I needed a Mexican outfit.  After much deliberation and with a hangover I began cutting out the Lekala #8000 – a free pattern that is made to measure my size (or yours)!  It was 4pm and we were going out at 7:30pm so I didn’t have time for fitting issues!

I decided to use the raspberry stretch denim in my stash.  As you can see from the photo below it came very close to being another pair of culottes!  And it’s also what I used in my last post to make the personalised peg bag.

The dress went together really easily.  I had it finished before 7pm but I did cut a few corners.

I added a big red flower from my trip to Bombay Stores the previous day with Amanda & Neela:

The neck and arm edges were left unfinished.  I just used a fancy stitch so it didn’t look too untidy.  Think it was about £2. 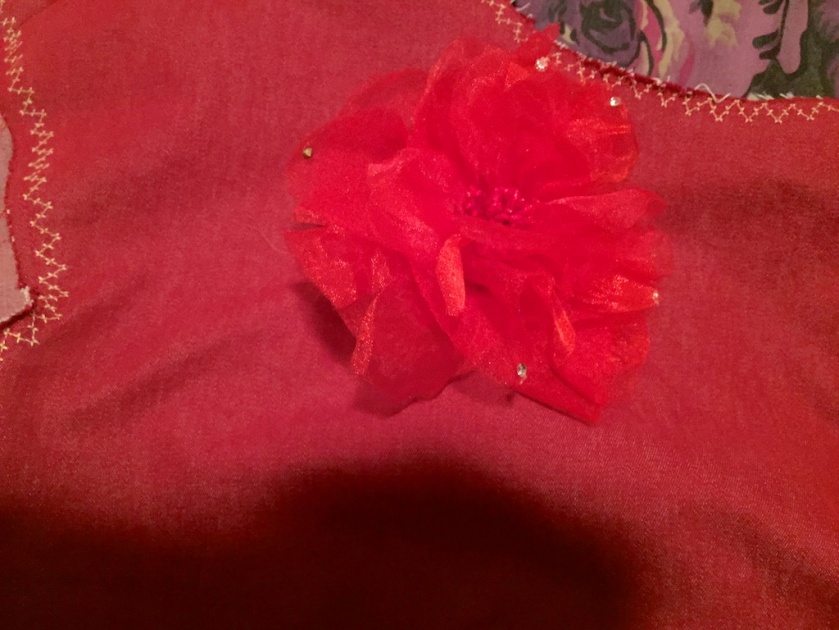 After I hemmed it I added a length of chucky ric-rac:

A red and green scarf (also from Bombay Stores) was fastened around my waist and together with a borrowed sombrero I was ready to go!

It wasn’t the best fitting garment I’ve ever made and I was surprised it was so tight.  The pattern calls for a woven and this was a stretch denim so I thought it would have plenty of ease, but alas no.   I did feel a bit self conscious as first, but once the margaritas began to flow everyone had their beer goggles on it didn’t matter.  (I was driving by the way and could really not face any alcohol due to excess consumption the previous evening). 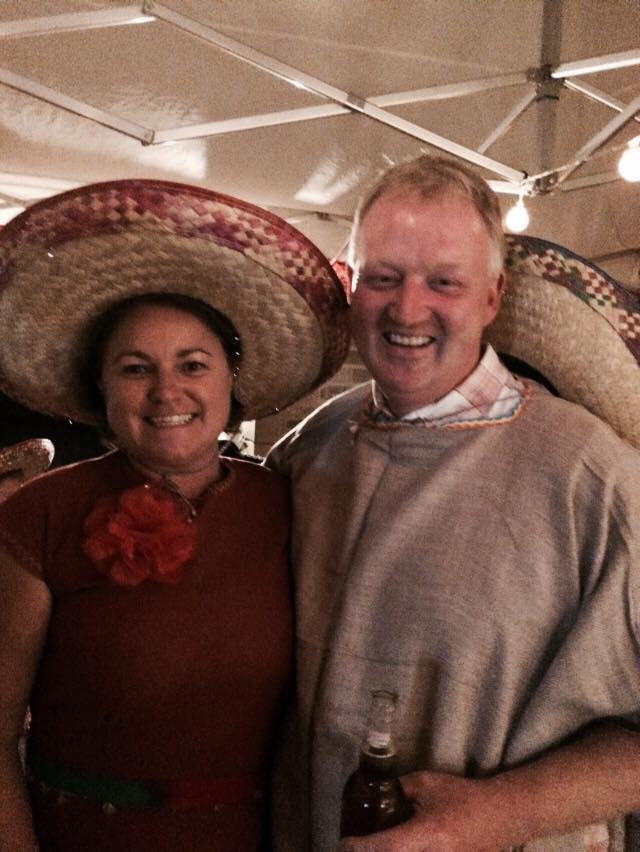 For Hubby’s outfit I cut a hole in a big scarf I bought from, yes you guessed, Bombay Stores, and added some tri-coloured ric-rac to the edges.

The night was brilliant. There was even a trio of Mexican singers who kept us entertained all evening.  Though they did surprise us at the end of the night when we heard their Cockney accents!

A few days later I was going out and needed a new frock.  I dug out the mexican and made a few alterations.  The dress that is, not the singer!

First up I let out the side seams as much as possible.  This gave me almost an extra inch of breathing space.

I did nothing to the zip but have to show you as it went in beautifully first time (when I made the dress originally).

Instead of unpicking the fancy stitching I just trimmed the edges enough to make them disappear.

reshaped the neckline.  Sorry for the miserable face.  Maybe I should’ve cropped this out! 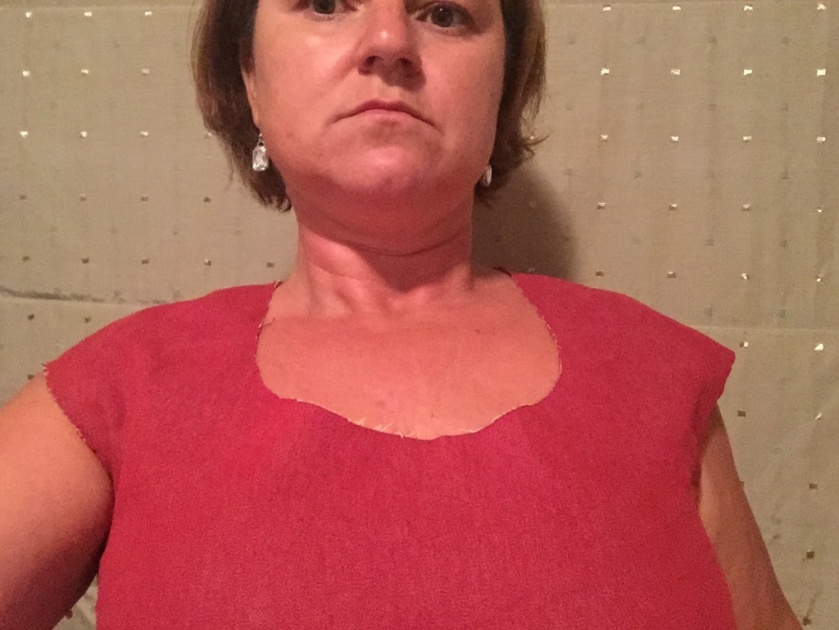 Once happy with the shape I stay stitched the neckline. 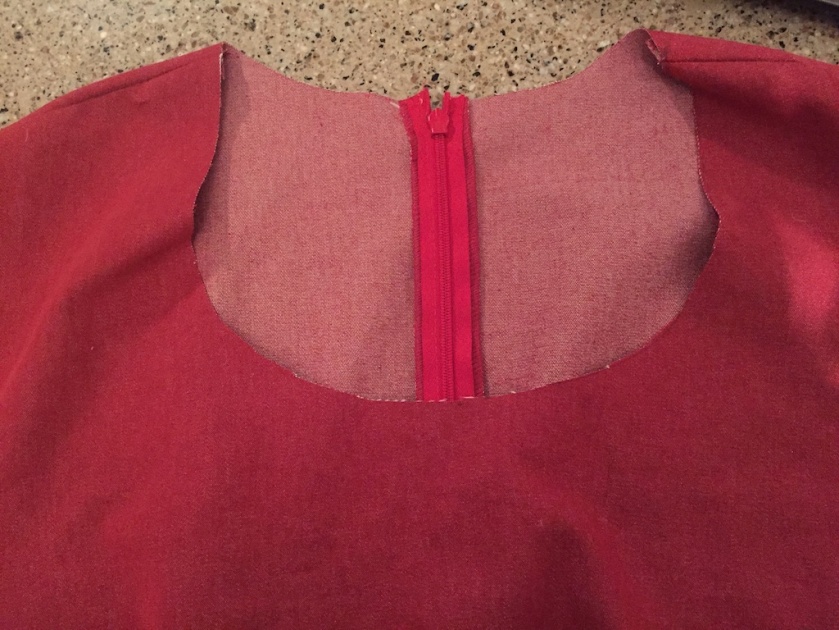 And added bias tape to finish off the neck and arm holes. 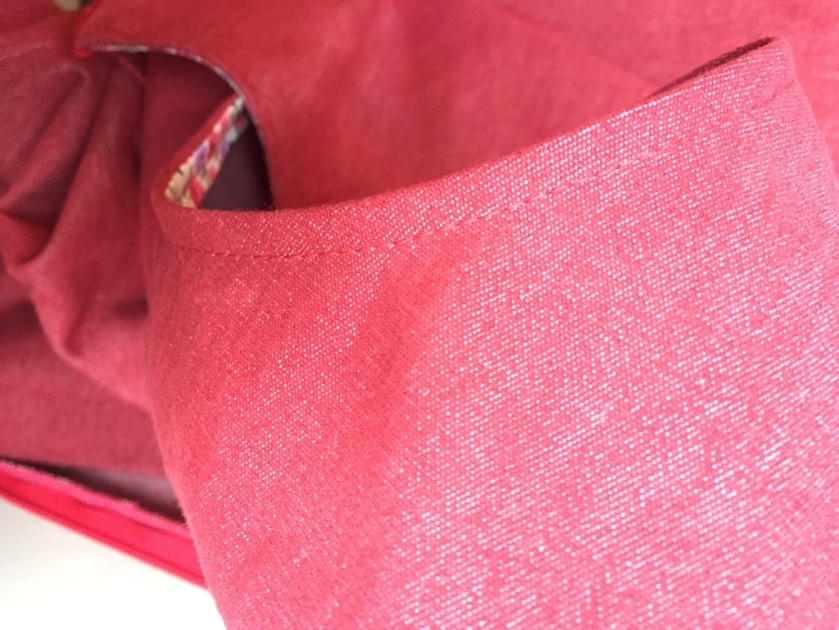 Very pretty!  I almost want to wear it inside out! 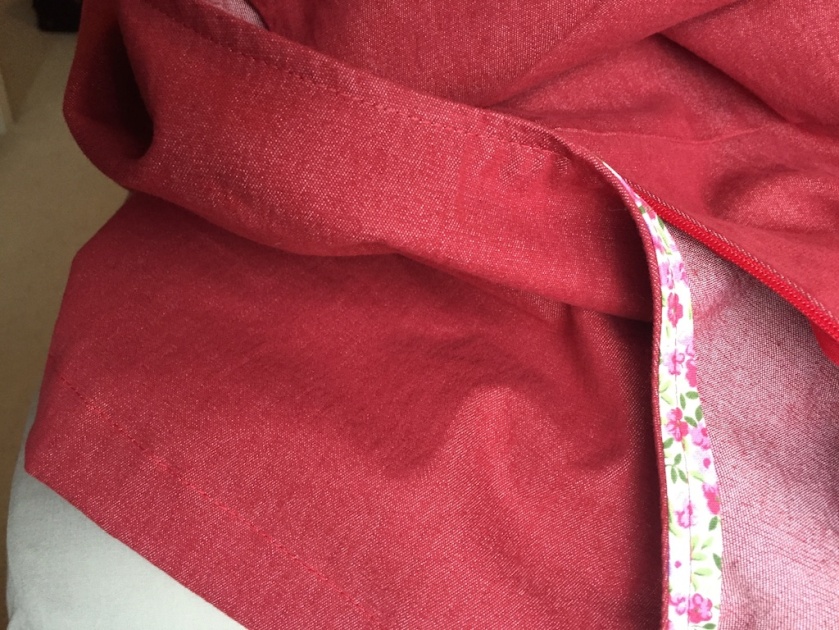 I unpicked the hem and lengthened it as much as I could.

And here we are – a lightly better fitting frock! 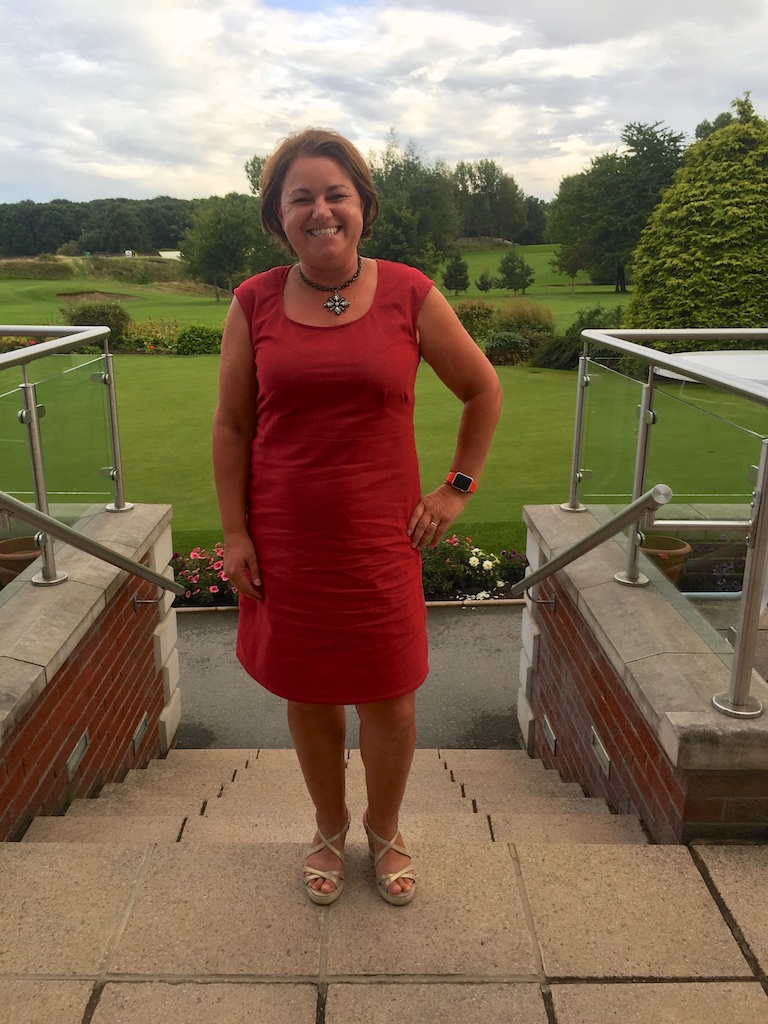 And the back – a sway back adjustment is a necessity if and when I make this again.

I’ve not had chance to wear this again, but really must try it on and see how it fits now I’ve lost a few pounds!  I think it’s a definite improvement without the ric-rac and with the new neckline, don’t you!

If you’re not tempted to have a go with Lekala custom fit patterns, and I’d be surprised if this attempt would entice you, head over to Nee’s blog – Sew Fusion.  This is one of her go to patterns and she’s made some stunning versions, all with just 1 metre of fabric!  She even called her latest one after me – The Autumn Ali!!  For this one she’s using the body of Lekala 8000 and the petal skirt (another free pattern) from Itch to Stitch.  It really is stunning! 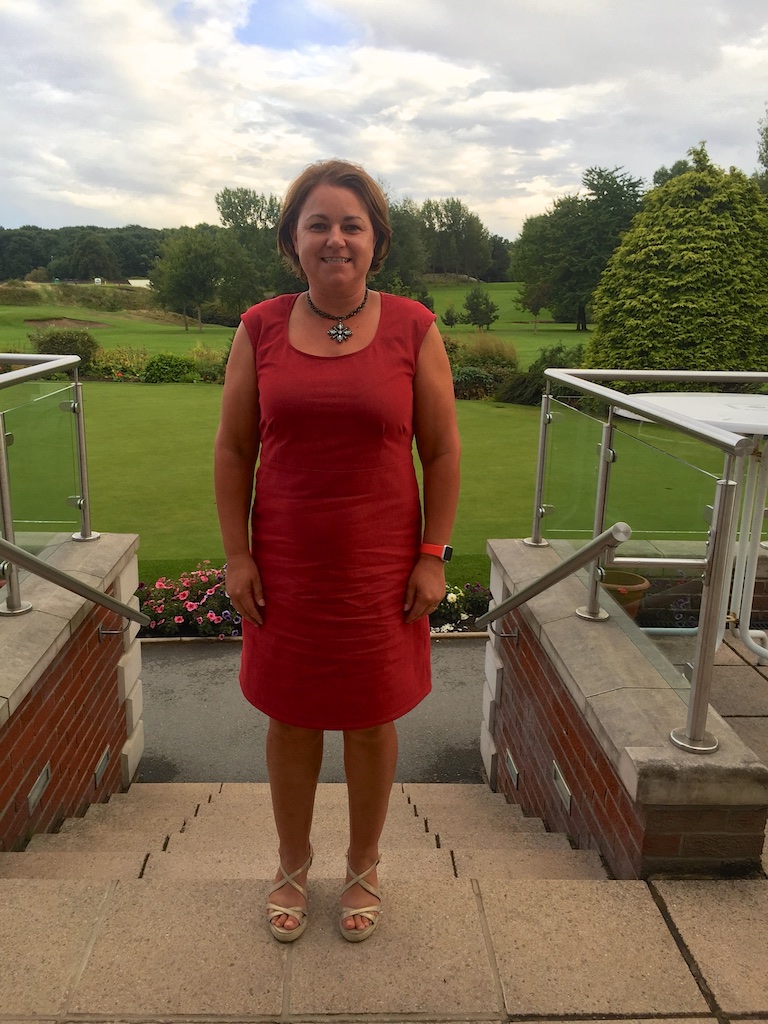 I don’t think I’ll be wearing it in the near future with bare legs, but with tights, long black boots and my black Julia cardigan I think it will come in useful!