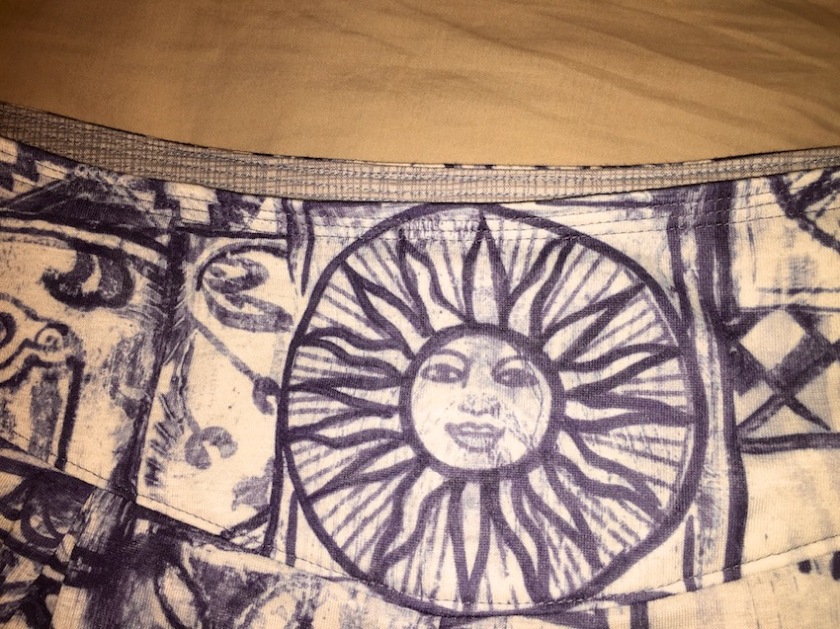 Back in May Kat Hardisty from The Monthly Stitch and Muse Patterns got in touch and asked if I’d like to join in something new for Indie Pattern Month.   In return for being given a pattern bundle I was asked to make one or more of the six garments and tell you all about it.

I chose the Getaway Bundle.  At the time of choosing I had no idea what patterns would be included, but as I was going away on holiday in June I was sure there would be something I’d want to make. And there was! 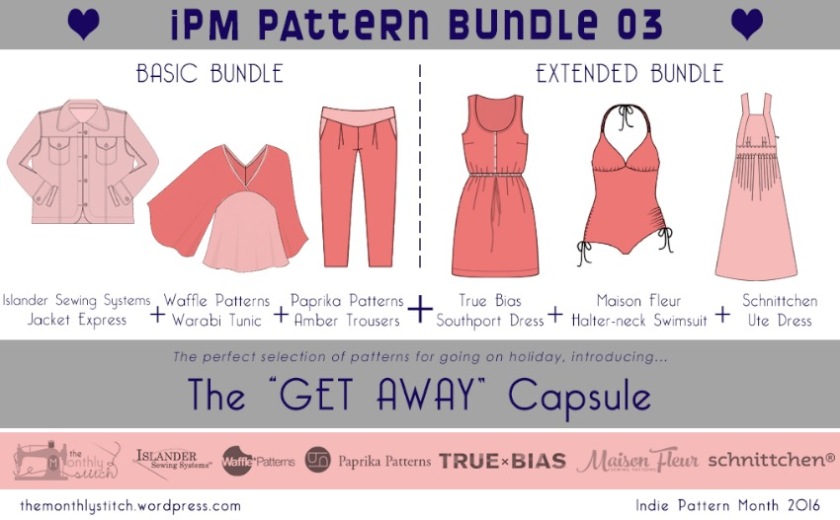 It was all a bit exciting and if I’d have had time I’d had made at least 4 of the garments.  I’ve already got the Islander Jacket Express pattern traced off (from at least 18 months ago!!) but not gotten round to making it!   But time wasn’t on my side so I first off the Amber Trousers.

The trousers were made in time for my hols but due to extremely hot weather I never wore them (the lowest temp through the night was 33 degrees C!!), but I did wear my shades and flip flops in the back garden for the photo shoot to try and get back into the holiday spirit for you.  Next time I make them for my hols they’ll be in a cool natural fabric!

I had a rummage in my stash (as you do!) and was chuffed when I found this stable, fine to medium weight jersey.  It has slight stretch, and feels like some kind of manmade fabric, and behaves more like a woven when sewn.

I bought 2m a couple of years ago from Fabworks with the idea of making a maxi dress.  Obviously the idea never materialised into anything, which can probably said for most of the fabric in my stash.  All bought with an idea, which hardly every come to fruition.  Well, not to the original idea.

I feel like I’m waffling on a bit here so just reining myself in and getting back to telling you about the pattern I made!

They have a fitted yoke on the back and front.  Below the V shaped yoke at the front there are inverted pleats.  The are slash pockets either side and the pants close with an invisible zip at the side seam.  The are 2 views – a tapered leg and a wide leg.  Both styles would made fab shorts and with wide leg would make really cool culottes.

The trousers are sized from 1-10.  I like that type of sizing – you HAVE to measure and can’t just assume you know what size you are.

They suggest drapey fabric for the narrow leg version and fabric with more body such as linen for the wide leg version.   To be honest there won’t be many fabrics that these couldn’t be successfully sewn in.  There’s no mention of a jersey but mine are look fab – I’ll let you know shortly how I changed things to allow for the stretch in the fabric.

The PDF was straightforward to put together.  I’ve used loads of different companies for PDF patterns and some have minor alignment problems, but none in this.

When I stuck the PDF together I cut out with wide leg version in size 6 which was just a bit smaller than my waist and just a bit bigger than my hips.

There’s a blog post about how to fit the Amber trousers.  It explains how to make a mini muslin just using the yolk.  Mine fitted perfect so I just went straight into making the trousers.

Once I had laid my pattern pieces onto the fabric I soon realised making the wide leg version wasn’t going to be an option.  The instructions say 2.2m are required for sizes 1-7, and they’re aren’t wrong!  I quickly traced the size 6 narrow leg which only took a couple of minutes so no major hold up.

As my fabric was a jersey, albeit stable it had to much and as I didn’t want my breeches to be falling down I used a cotton for the inside yoke pieces.

I applied a lightweight iron on interfacing to all yoke pieces so give extra stablility.

I found the top of the trousers wanted to curl and bunch up so stitched 3 row of top stitching which help.

If I made these in a solid colour I might even experiment and make a feature of the topstitching and continue it all the way down the yoke.

These were a doodle to put together.  I’ve made quite a few Yasmin Yoke skirts but have never quite mastered getting a really good finish on the inside of my invisible zip.  For the Amber trousers there’s a tutorial on how to insert an invisible zip with a lining which made it so much easier.  The only thing I did wrong was to trim the zip tape before I’d finished sewing.  As they say in the GBSB, READ the instructions!!

Here’s the outside of the invisible zip (what zip! I can’t see if!), the photo of the inside can be seen above where I showed you the inside yoke pieces. 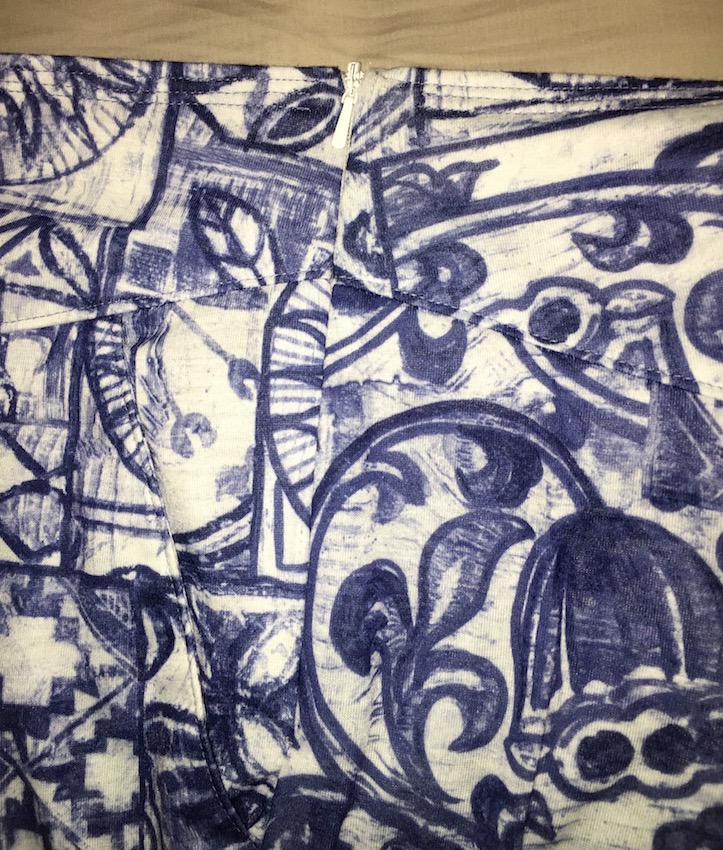 When I’d finished the trousers, except for the hemming, the hardest thing was to decide on the finished length.  They are designed to fit just about the ankle but I played about with a few variations in the length….

Eventually, after them being hung up unfinished for over a week, I decided just to leave them long and hemmed them with a small hem.  At least I could still roll them up if needed. 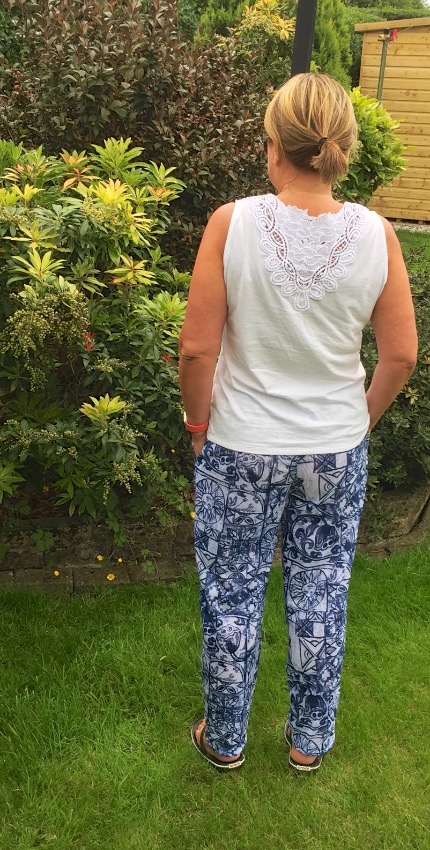 I think I need a shorter photographer.  The hubby’s 6ft3 and it looks like he’s looking down on my in the pics! 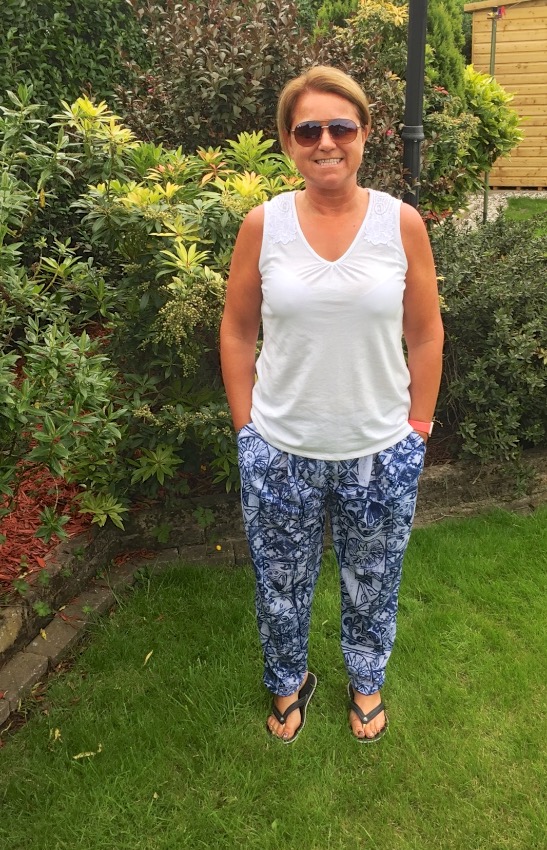 So far I’ve only worn them with a white plain top.  It’s a bit long and covers up the yoke.  As I’m not a tucking-in sort of person I need to either shorten this one or see if I can whip up something else and wear it with something that finishes around the height of my waist.

Here’s the front, I love the centre sunny face, such a shame it’s hidden by my top.  You never know if I loose a few more pounds I might be wearing cropped tops before the summer’s out! 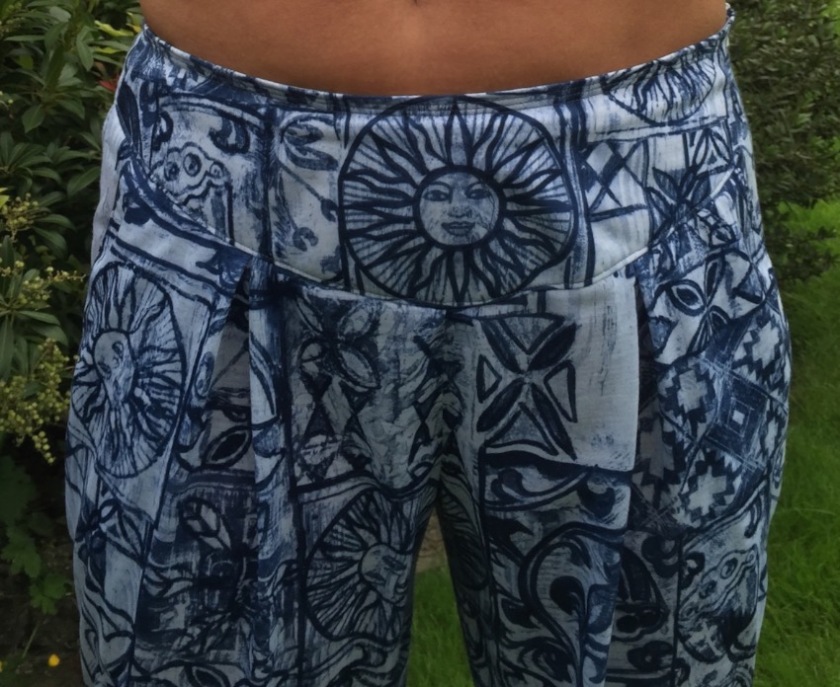 I’m really pleased with the fit across the back and the front.  The yoke really does give a smooth finish and is really flattering. 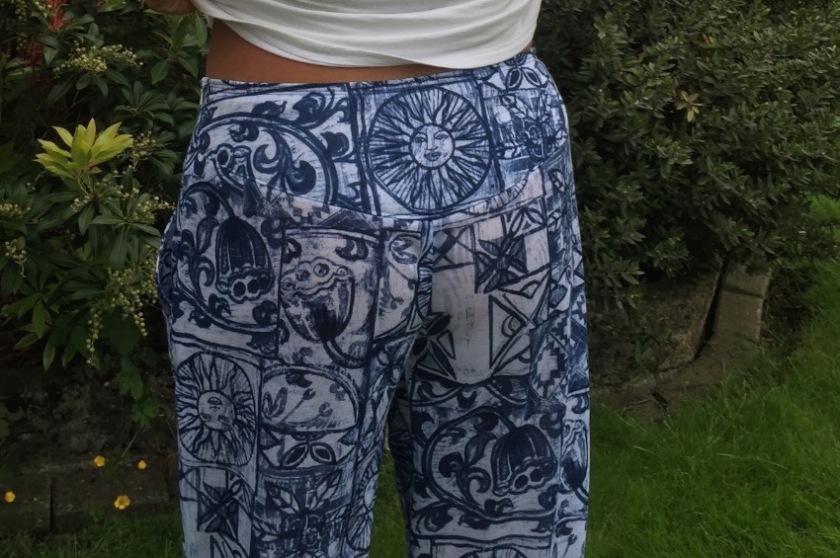 Will I be making these again??

Would I do anything different??

The only thing I will change is to add a centre back seam and zip to the yoke.

When I make my Yasmin Yoke skirts the backs and fronts are completely sewn up and more or less finished, including inserting the back zip.  This then allows for basting and tweaking the fit when sewing the front and back togethers at the side seams.  It also allows for any future fit alterations if my measurements change.

I’m hoping to get the Southport dress sewn up in the next few days.  I started cutting out but the fabric was a really shifty crepe and I’m thinking I’m going to change my mind and use something less challenging in the hope I’ll finish it before the deadline for this pattern bundle.

Just to say as I mentioned earlier I was given the pattern bundle free of charge, but all opinions are my own.

Don’t know about the pattern bundles, or want to know a bit more??

There are two Getaway Capsule bundle options – the basic bundle, and the extended bundle.

Why are there bundles?

Every June, The Monthly Stitch runs an online event called Indie Pattern Month. It’s a great way to encourage everyone to try out new-to-them designers, and celebrate the diversity we have available to us in patterns. During June, there are sewing contests, interviews with designers, and an annual pattern swap.

This year, we wanted to try something different and offer pattern bundles as a way to give people a chance to get a great deal on some patterns, and encourage everyone to try out a variety of designers!

There are more details on Indie Pattern Month over here: https://themonthlystitch.wordpress.com/indie-pattern-month-2016/

Contains three patterns – the Amber trousers by Paprika Patterns, the Warabi tunic by Waffle Patterns, and the Jacket Express by Islander Sewing Systems.

Contains six patterns – the three from the basic bundle, and three additional ones.

Regular price for all six patterns is $67 USD. When purchased as a bundle, the six patterns cost only $33 USD – a saving of over 50%

Where does the money go?

The money is split evenly between the designers involved, The Monthly Stitch, and a charity chosen by the designers. For the Getaway Capsule, the charity is Little Sprouts (website: http://littlesproutsnz.org/  ) Little Sprouts are a great charity run completely by volunteers. They provide care packages for families with new babies or small children who need support – people living in poverty, refugees, people fleeing domestic violence, etc. They give the families everything they need for their child – clothing, nappies, safety gear, even cots and buggies when needed, making an immediate difference in the life of the child.

The Monthly Stitch will be using their share of the bundle sale price to move the Monthly Stitch website to a self-hosted platform. This will mean lots more storage space for people to upload photos of their sewing projects, and it will also mean we can implement other community functions, such as forums.

The Getaway Capsule bundles are on sale for two weeks only – the sale will be begin at 00:00 UTC on 23 June, and it finishes at 00:00 UTC on 6 July. Both bundles will be found here during the sale dates: https://themonthlystitch.com/

There will be sneak peeks of the patterns that will be included over on The Monthly Stitch Facebook page https://www.facebook.com/groups/themonthlystitch/

If you’re still with me, here’s a treat for you…….