Late to the party? Crikey, I don’t think I’ll ever get there, late or otherwise!

So, what have Selfies and Sorbettos got in common?  ……A year ago I’d heard of neither.

My mums only just learning too.  Whilst taking this selfie at cricket she said…… 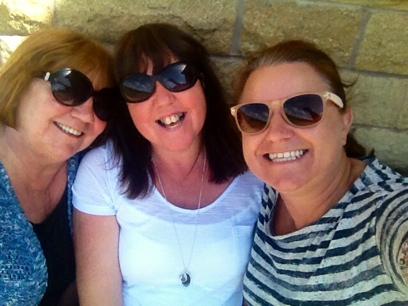 Whilst most of you have perfected and hacked this well known (free !) indie pattern from Collette Patterns i’ve just about managed to get to grips with bias binding and made 3 this month!  Even though I’ve used bias trim before, I’ve recently invested in the Craftsy Class ‘sewing on the edge’ and have learn a lot, including a super easy way to make my own without one of the fiddly binding makers where the tape has to be just the exact size, or else.

My sorbetto pattern has been stuck together and hung up since last year, and for some unknown reason I’ve not bothered to sew it.

All this changed when I was umming and arrhing over this ill fitting maxi dress and tuck the plunge with my first Sorbetto.

I love the fabric. The dress was donated by my mum in law, and has only been in my stash about 4 weeks, but I know even if it fit me properly it was too loud for me to wear very often as a maxi dress.

I turned the fabric upside down and used the stripey part for the upper part of the Sorbetto.  It went together painlessly, I even used french seams everywhere.   The only thing I thought was a bit odd was the length of the bust darts.  I never noticed when I was sewing, but when wearing I’m conscious that they almost meet in the middle.  Well, maybe a slight exagertation!  I put it down to not being very accurate when I sewed the darts but the second Sorbetto turned out the same.  As both were patterned fabric no one has noticed except me. Well, I’ve not caught anyone staring at my darts yet!

Here’s a selfie of Harrison and me watching Yorkshire play cricket at Headingley in Leeds.  My life revolves around cricket, Harrison is playing for the Yorkshire Under 12s this year, and I have the best tan ever (except between the knees and bust which are super pasty white!). And when he’s not playing, there’s always a match somewhere else that we can watch.

For those of you who aren’t familiar with cricket here’s my boy coming off after he’d batted and scored 54 runs:

Here’s a few on the hanger pix. I so love this top and have worn it more times than I can remember, with my Yasmin Yoke Skirts.

Here’s a close up of my bias binding:

My 2nd Sorbetto was also a refashion.  A man’s shirt that I bought for £4 in a charity shop.  This was a little fiddly fitting the pattern onto the shirt.  I used the button down front and the curved hem.

Here it is in it’s original state:

I positioned the buttons then put a strip of cellotape over them so I could keep their positions in the right order. In the end I only sewed 3 extra ones, and stitched down where it gaped at the bust.

Well, it gives you an idea of how it looks!

This is another top i’ve worn loads, again with my Yasmin Yoke skirt.  I think anyone at cricket who sees me regularly must think I have some sort of summer uniform.  Sometimes i jazz things up a little with a Victoria Blazer!

So, to Sorbetto number 3.  Last and by no means least.

This one was inspired by the Monthly Stitches challenge for July…..Mono Sewn.  I’ve already blogged about my lovely new mono frock, worn 4 times in 2 weeks due to 2 weddings, lady captains day and a day at the races. I’ve really gotten my monies worth out of my 4 pound frock!  A pound an outing!  Surely that must be some sort of record!

Here we are, my mono sorbetto:

Yes, you’ve guessed it, worn with a yasmin yoke skirt!

Think I look a bit worried in the photo above, as if someone might walk in on me taking my own photo.  Wish they would’ve done, they could’ve bloody well taken them! 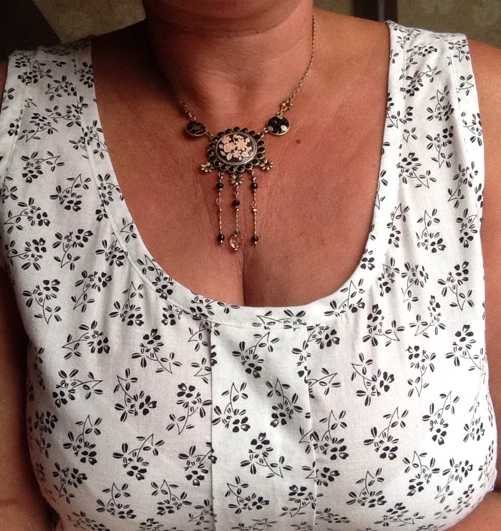 Check out the necklace! A gift on my lady captain’s day, which turned out to be more like my birthday as I received so many gifts!

Now I’ve not gone daft, but these photos show where the original dart finished on my first 2 sorbettos (RIGHT) and where i’ve altered it to finish on this pattern (LEFT). I didn’t change anything else for the shortened dart, wasn’t sure if I should, so didn’t bother and it’s turned out ok.

To you seasoned bloggers out there, what’s the next step? Sleeves? Frock? I’ve googled and looked at so many variations I’ve got a serious case of colettitus!  Any links to any exciting hacks would be welcomed.

So now I have 3 Sorbettos and 4 Yasmin Yoke skirts.  I really can’t believe i’ve made the same things more than once when I have oodles of patterns crying out to be made!

What’s the most you’ve made of one pattern?  I’ve one Yasmin unblogged (but not unloved) but will post it with the 2 more I have planned in the near future!