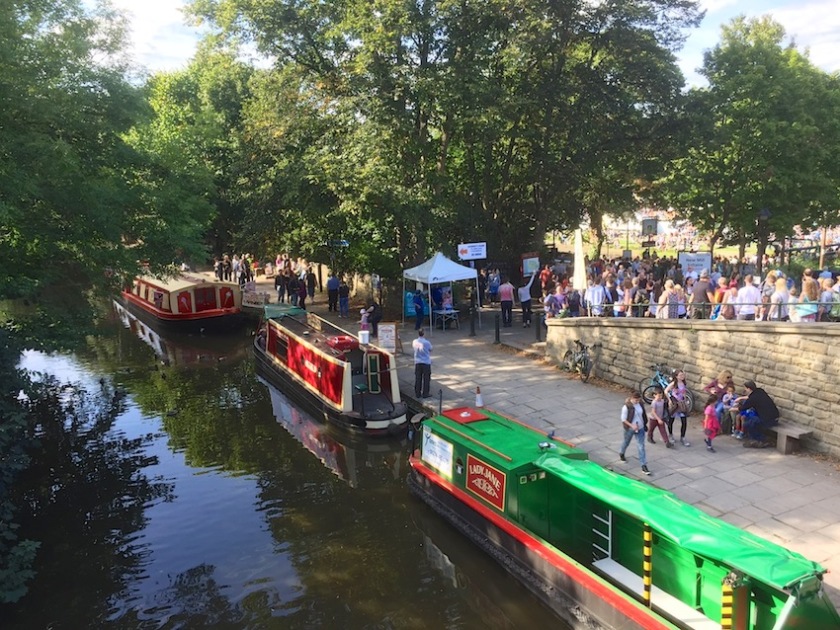 I’ve just been looking back through my Sunday Sevens folder of photos on my Mac, going back to the beginning when I started in March ’15.  I think it’s one of the best things I ever did – joining in Natalie’s Sunday Sevens.  It’s the diary I would always liked to have kept, but wouldn’t have kept up to.  All the photos remind my of little moments which would otherwise have been forgotten.

Last week started with our final Works Golf Society outing of the years.  The fellas tend to hit the ball further but a bit wilder than the ladies so a lot of time is spent looking for balls.  On a positive note the blackberries were ripe so when we deviated from the fairway I was able to pick and eat them. 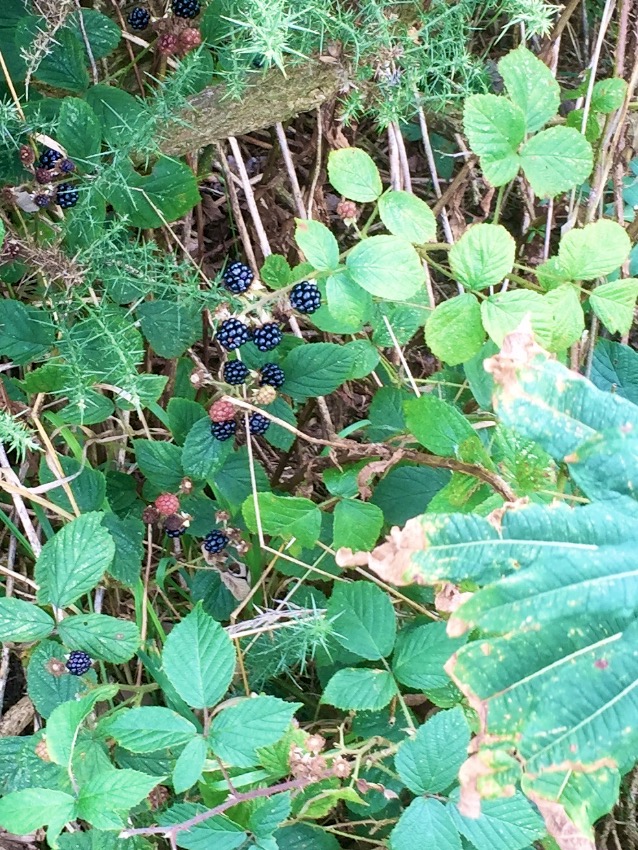 This is an old pic of my car (from a previous SS post).  My car went in for it’s MOT and I’ve not seen it since.  It’s 14 years old and failed miserably.  It’s been sold and I’m in the process of trying to sort out a new car.  One thing is for sure, it won’t be another Merc!  I never even got chance to say bye 😦 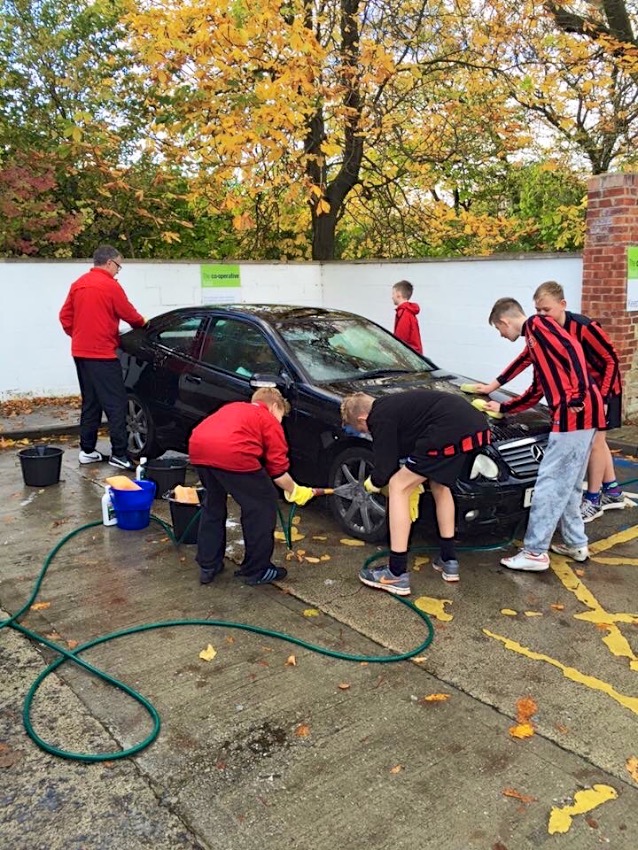 My stethoscope pouch in action – Thanks Jen! Not it’s intended use when she made it but the best thing in my rucksack at work. 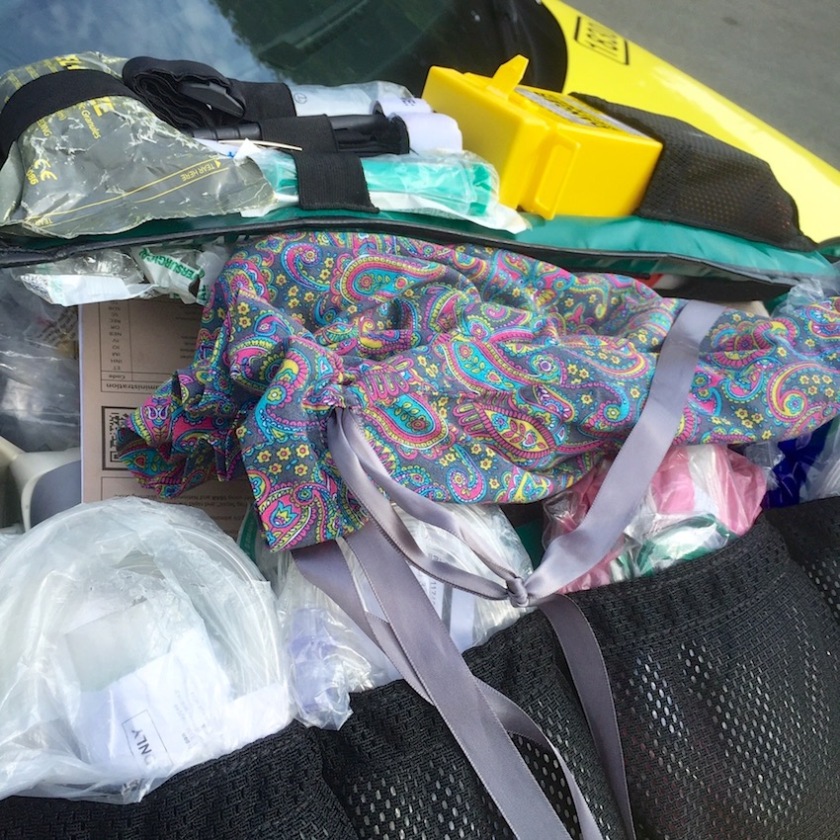 Apart from golf, gym classes (we tried Zumba – such a laugh but no photos!) and work the week was fairly unphotoworthy.  Until Saturday.

We weren’t sure what to do with ourselves.  What do normal families when they aren’t into cricket?  The season had finished and we were at a loose end.

We decided to have a ride out to Salts Mill in Saltaire, Shipley.

Up until 1986 cloth was produced there but now it a place for art, dining and shopping.  Hubby recently bought a bike from the bike shop there and it needed to back for a mini service. 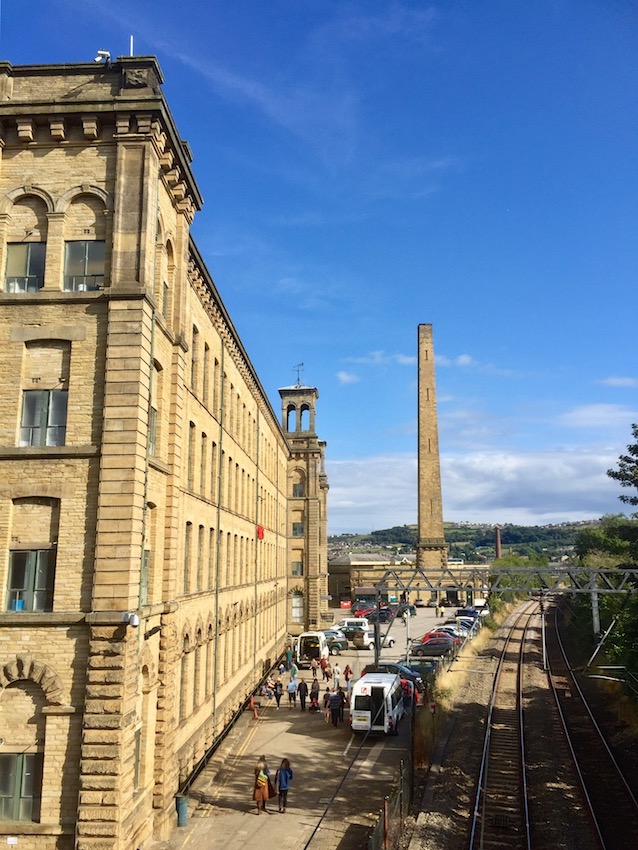 It was so busy.  The car parks even had attendants guiding everyone where to park.  When we asked why it was so busy we found out it was Saltaire Festival.  A huge annual event that started in 2003 to commemorate 150 years since Sir Titus Salt created Saltaire.

Inside the huge mill there was the strongest smell of lilies I’ve ever smelt.  Huge vases were on every table. 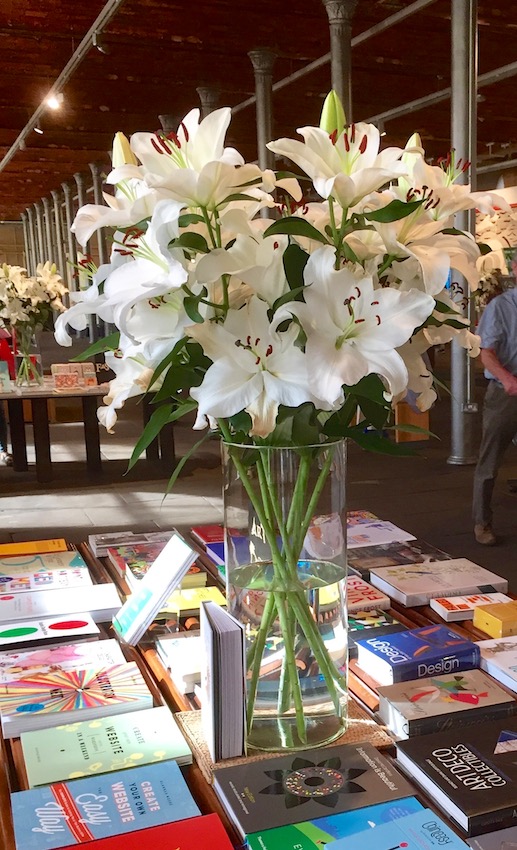 On the 2nd floor I found a section selling dressmaking books, but managed to abstain from buying any. 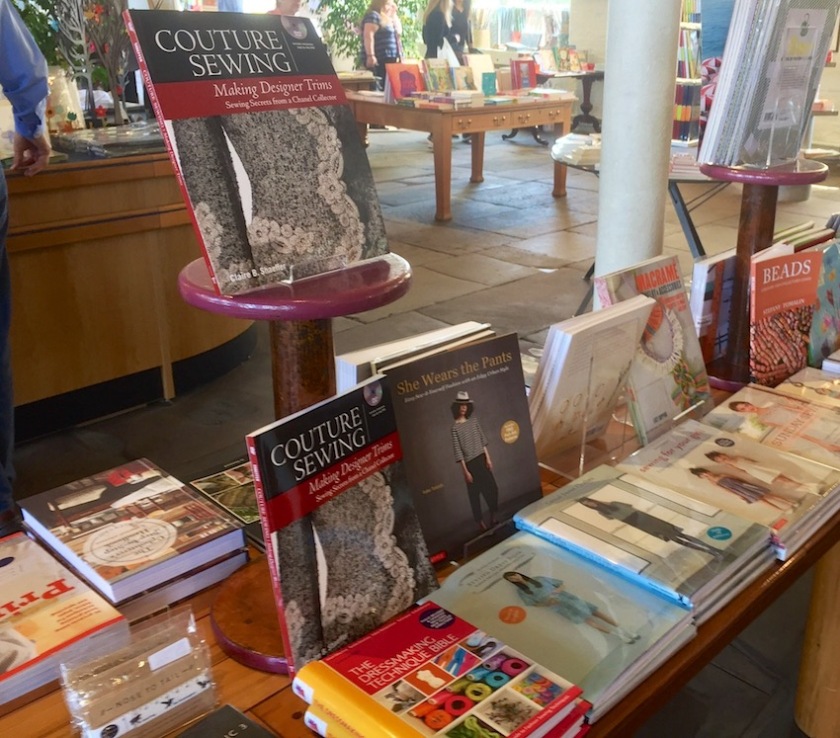 Outside there were quite a few people dressed up.  I need to have a read of the festival website to find out what that’s all about, and haven’t had chance yet. 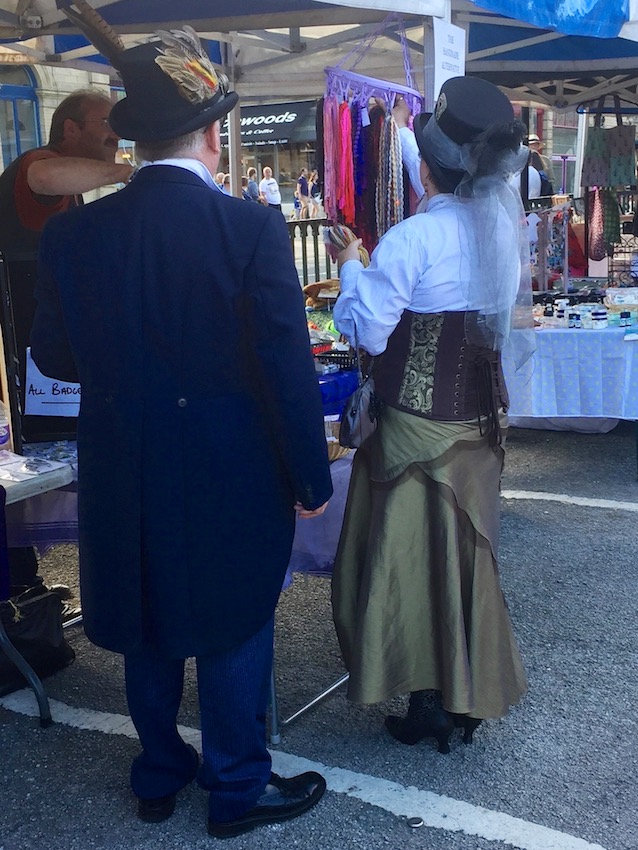 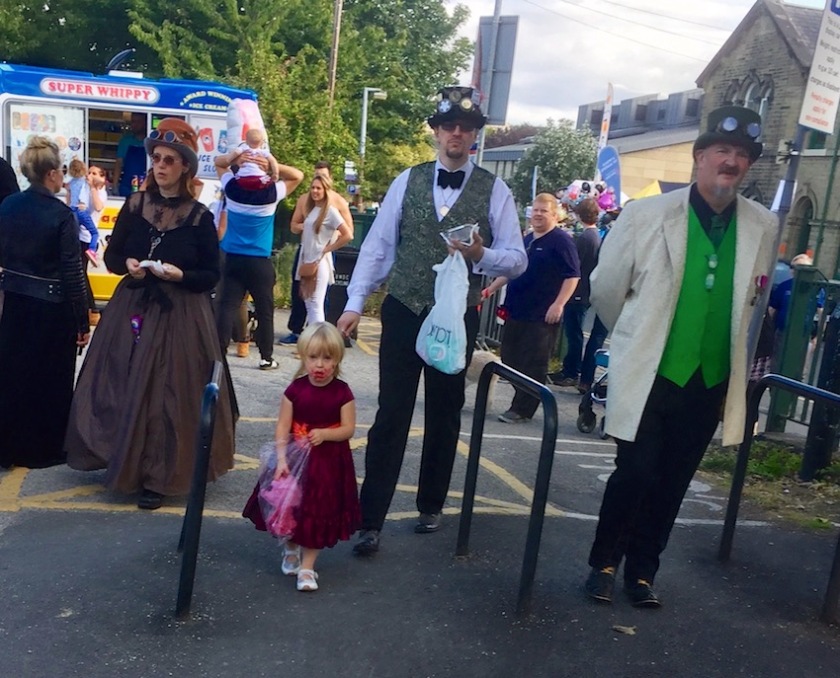 The chap below looked a bit sinister!  The one in the hat – not H in the background!

At one side of the mill is the train track, and at the other the canal.

Beyond the canal is the river, with a pub in between.  So of course we had to stop for refreshments.  Unfortunately this is the only photo showing beyond the river where there was a stage and music playing. 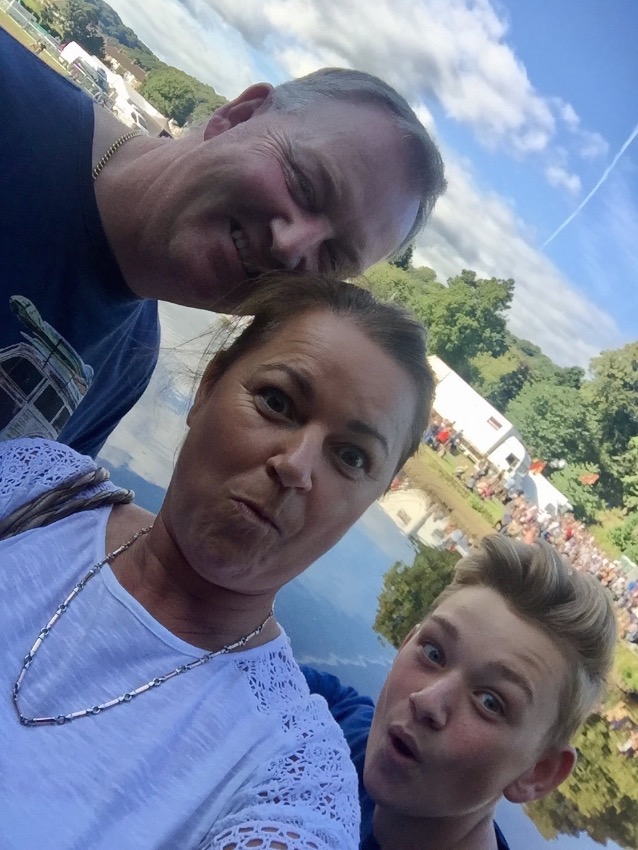 Sunday night we did what normal families do, hence no Sunday Sevens post on time.  We watched X Factor.    We are unashamedly X Factors biggest fans! 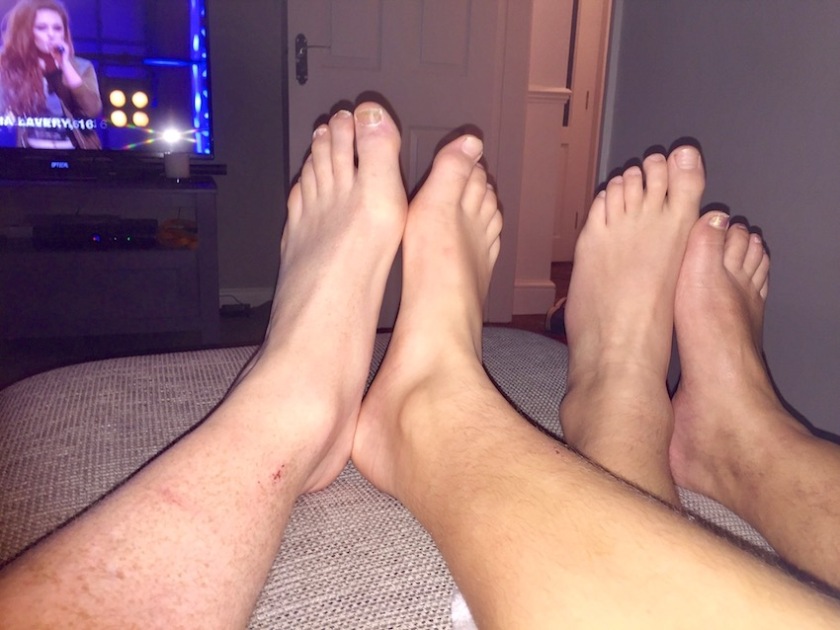 Enjoy york week!  I’ve a busy one coming up, including Sewbrum on Saturday – I can’t wait!! Are you going?