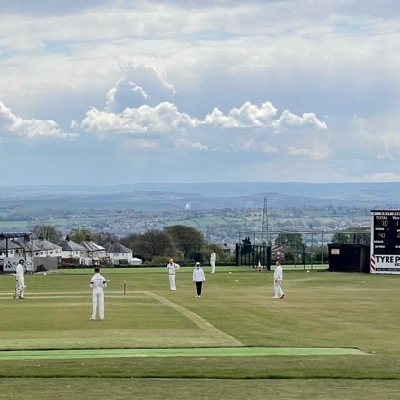 Brrrrr…. I’m feeling cold writing this. The April showers that came last week are continuing into May have made the lovely weather that we had in early April seem a distant memory!

Monday was the best day of the week and as rain was forecast I made the most of the weather and headed off to B&Q to buy some paint for the garden.

I’ve been putting off making a start on this as there’s so much to do. One side of the fence is complete. Rain’s put this on hold for at least another week looking at the forecast.

Tuesday before golf I planted up a couple of hanging baskets.

And turned my back porch into a temporary green house!

Tuesday afternoon was like the middle of winter! The greens turned white with the hail stones, and then we had horizontal rain.

Later on in the week was still freeeeezing but at least we didn’t get wet again.

More rain on Saturday. The players at cricket don’t have to stay out in it like us golfers do, and at least the bar is open!

After cricket we ordered a curry from the takeaway and a took the opportunity for a pic of little H.

On Thursday we had an out of town job at work, so stopped off at the golf club for our break on the way back! Here’s my lovely little work sis Bex.

I did mention in my last Sunday Sevens that I’d be putting them on hold until after Me Made May has finished, but I won’t be posting MMMAY until next weekend so here I am!

Not sure what Sunday Sevens is about? It was a fab idea thought up a long time ago by the lovely Natalie of Threads & Bobbins – a fellow Yorkshire lass who lives in America. There’s no rules but the idea is to share 7 isn photos from your week. Read more about it on Natalie’s blog post – it actually took some finding – Sunday Sevens started way back in 2014!! Read her first post HERE.