I’ve spent most of the weekend making my 2nd Victoria Blazer from By Hand London. (Link added in case by some crazy chance you’ve not heard of those talented London Girls who make fab patterns!).

As usual I was struggling to find a photographer so I called at my mums. Before I could hand her my camera iPhone she had my jacket on and was away down the garden! 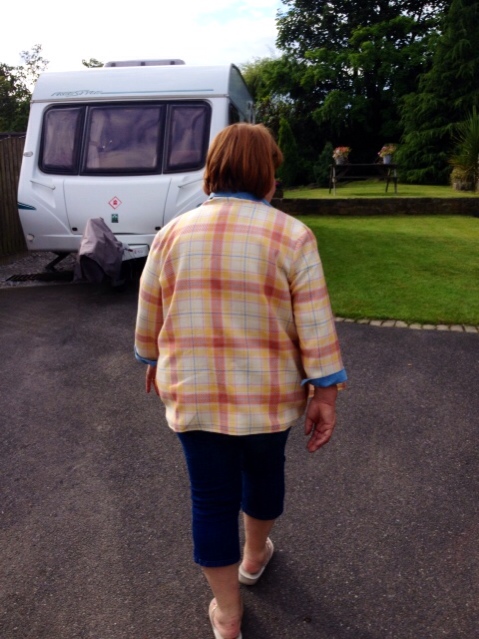 She gathered speed when she realised I was hot on her heals: 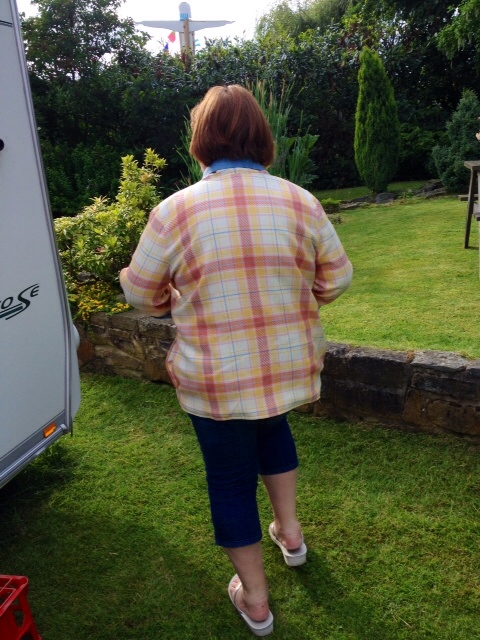 So here’s my mum modelling MY new Victoria Blazer: 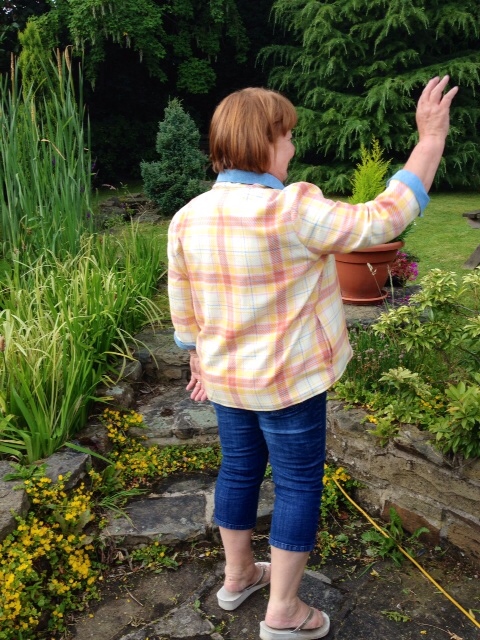 Unintentionally showing the pattern matching in the pockets.

I did eventually recover my blazer, but I think when I get round to making Victoria No. 3 it will be for my mum! 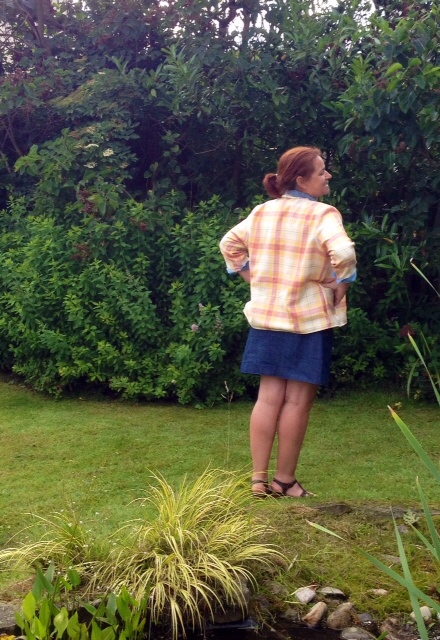 Back to the nitty gritty…..’how did I find this pattern?’, and ‘what changes did I make?’

LOVE the pattern! Who couldn’t or wouldn’t?!?!   I bought it (only a month ago) after spending the last 8 months drooling over all the Victorias around the blogosphere I really didn’t know what to make it with. I wanted a soft denim one, a flowery one, a linen one, the list was endless. Then, on a mini shopping spree to Dewsbury (mini because Dewsbury is really not that big, but worth a visit on market day) I found a pillar box red ponte knit with a little surprise……..

£3 per metre!!  What a bargain!! So 3 metres later I had a vision for my Victoria blazer!

Careful placement of the pieces were called for, the 2 circles in the middle of the pattern weren’t level, which I thought would cause a problem, but it worked out ok. I used the border on the very bottom for the collar, but thought it would look ‘too much’ if I’d have used if for the lapel and cuffs too.

I didn’t line this jacket as I didn’t have any suitable stretchy lining, and I’d seen Scruffy Badgers which turned out fab so I thought I’d give the lining a miss too.

I’ve worn this jacket to death, mostly with my denim Yasmin Yoke Skirts, and no one ever believes I’ve made it, tho they do when I confess to not stitching on the added embellishments!

I used red satin bias binding to edge the front and also to hem the bottom. Here’s Gertrude  modelling it:

My other Photographer was having a tea break! 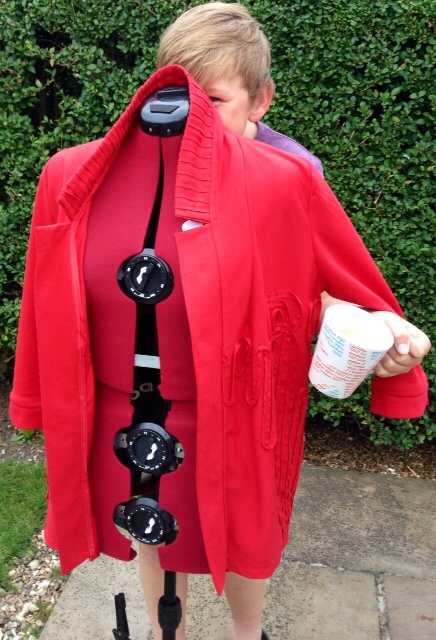 This is just the comfiest thing ever to wear.  Looks super smart with everything, but feels like I’m wearing a cardigan.

I’ve worn it so much I needed to make another. My measurements for BHL are 18-16-14.  For the ponte knit I made a straight 14 and it was fine due to having slight stretch. For the woven one I decided to cut an 18 with the intention of taking it in if needed, but it’s ok.

When making my plaid blazer there were one or two things I did slightly different.. 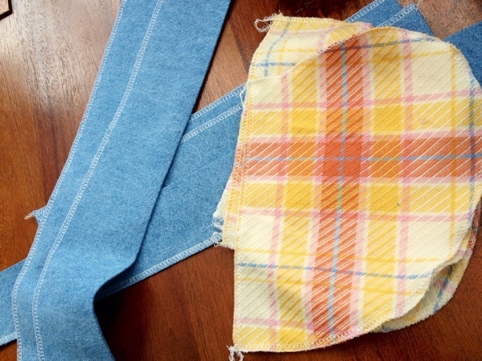 I overlocked everything and prepped my collars before I started proper sewing.

I was so pleased I’d been careful cutting out. The plaid matched in places I didn’t expect! Even inside the pockets! 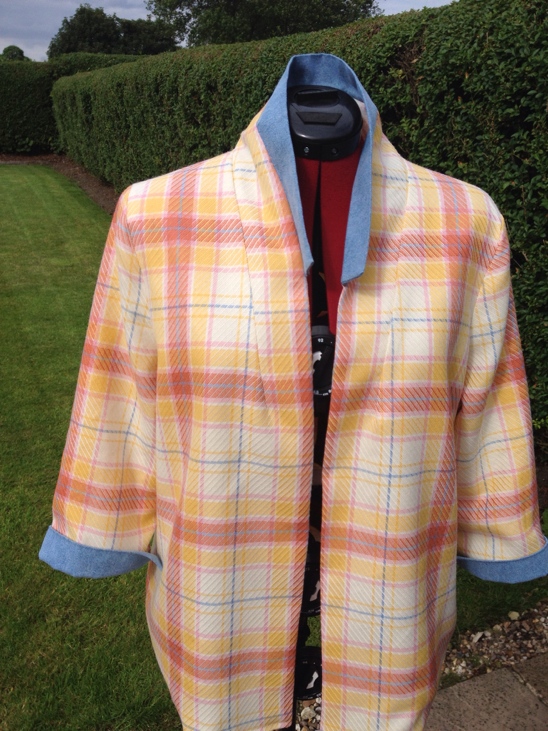 The inside is almost a gorgeous as the outside….. 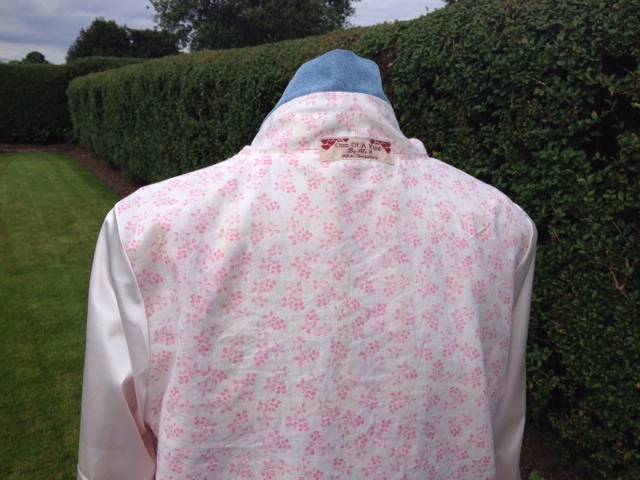 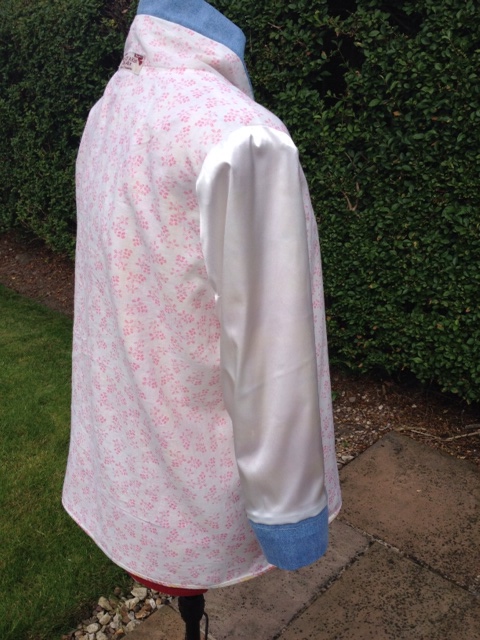 Now I think my next project is to make a Yasmin Yoke skirt with the pale blue denim!
Edited with BlogPad Pro