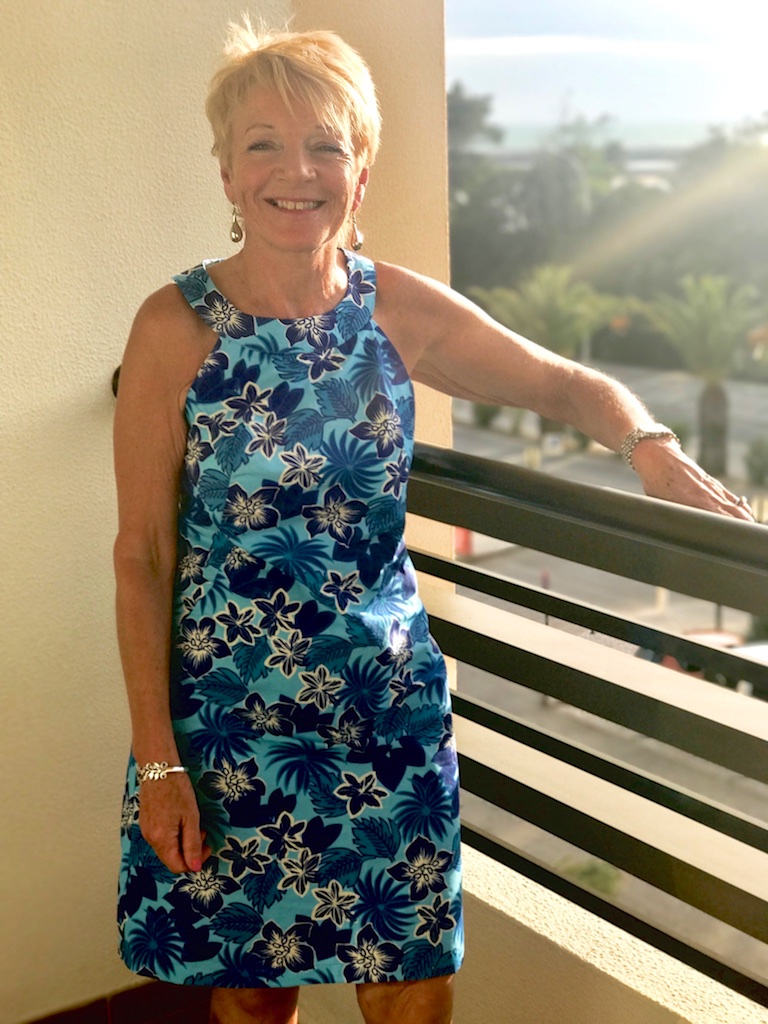 It’s a double bill and there’s been lots going on, including my long awaited ladies trip to Portugal.  If you’ve never thought of playing golf, it’s worth learning to play just to come on our trip!

2 weeks ago H was on school holidays.  Here he is with cyber mom, she had to stand on a chair to give him a kiss and for a minute I thought she was going to fall off!  And look she’s wearing my favourite Coco that is now hers.

And then we all went to play golf. (us, not cyber mum!)  H played with the juniors in their comp and came 2nd and played 3 under his handicap – which is a first.  He was really pleased.

And then it was soon time for some last minute pampering before my holiday…nothing like a glamorous foils shot to keep it real!

If you’ve been following the Tour De Yorkshire this weekend and know where abouts I live you might have realised that it’s only been a couple of miles away, and there’s been bikes everywhere……..even in the local supermarket. 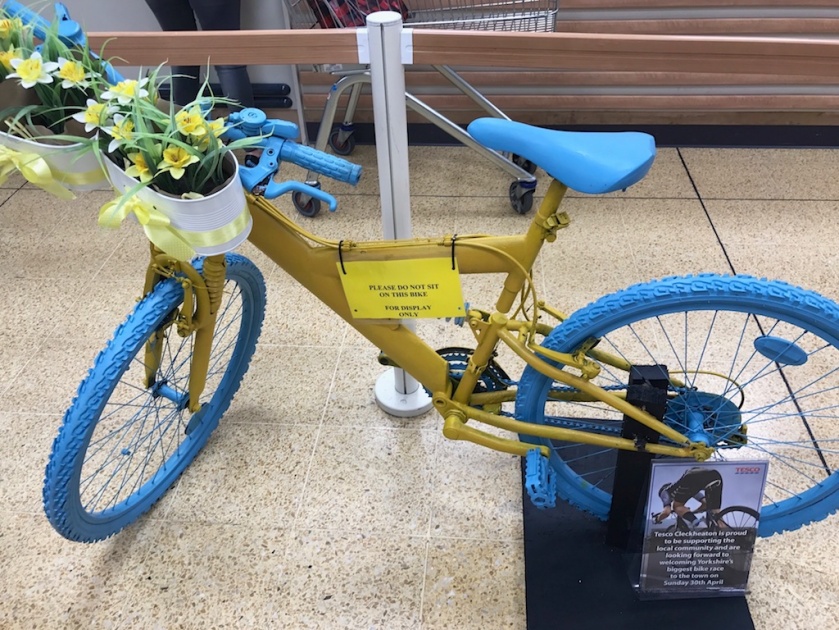 And then the 20th April arrived and we all met at the airport at 6am.

And guess what?!  I was 20 pounds lighter than I was a year ago when we all went away!

Our holiday was for 7 nights.  We played golf 5 times and each day had a colour or theme.

Our first day was a blue day………

Unfortunately I didn’t perform as well as I could have done and came last!  We all have holiday names, so from left to right we have Kizzy, Tiggles, Whiskey, Petra, Trixie, Misty and me – Taffy.  We’re named after pets we had as kids, and call ourselves Pussies. 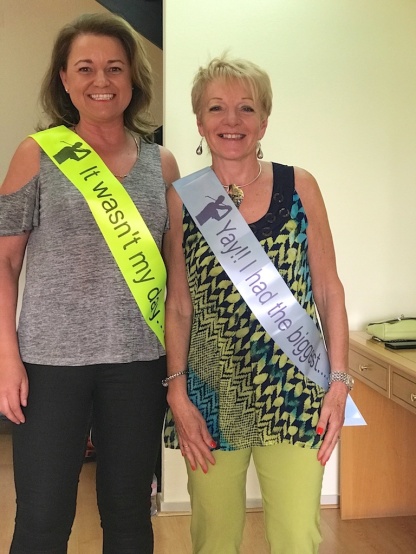 Luckily my score wasn’t the worst the following day, which was pink day.  Tiggles managed to get one point less than me…phew! 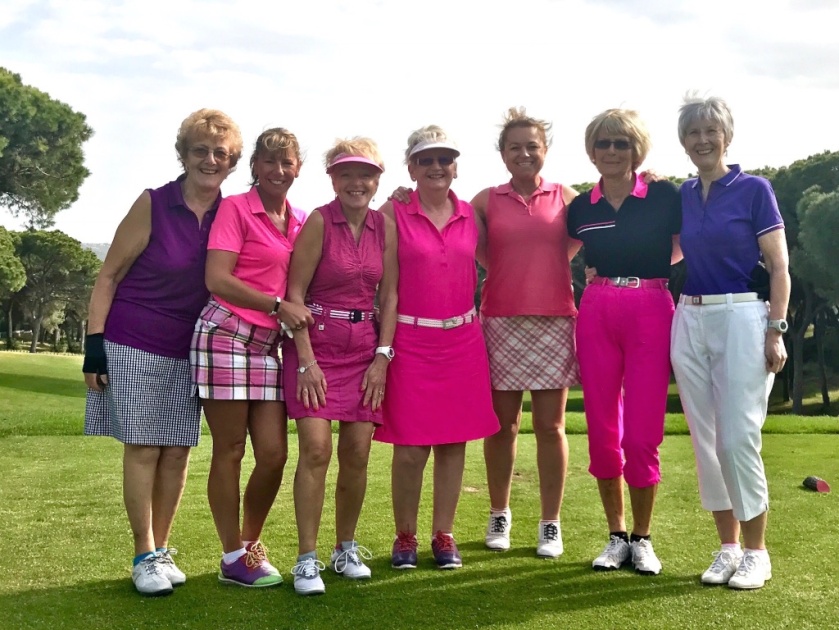 And she wore the sash.  I’m not sure why she wasn’t wearing it in this photo, I’ll be having words!!

And then there was the black, red and white day, but only Trixie wore red.

And then the sensible ones had a day off, whilst the hard core golfers had an extra round.  Obviously I’m not hard core, but instead googled ‘fabric shops near me’ (I know I’m not on my own doing this!) and found one only a 15 minute walk away!

Helen and I bought a few bits of haberdashery and stroked a few balls of yarn.

Did I mention my healthy breakfasts?  Each day I had an omelette with cake for afters.  I usually wrapped some up to put in my golf bag for a lunchtime snack, but sometimes I ate it all before it got into my golf bag! Greedy pussy!! 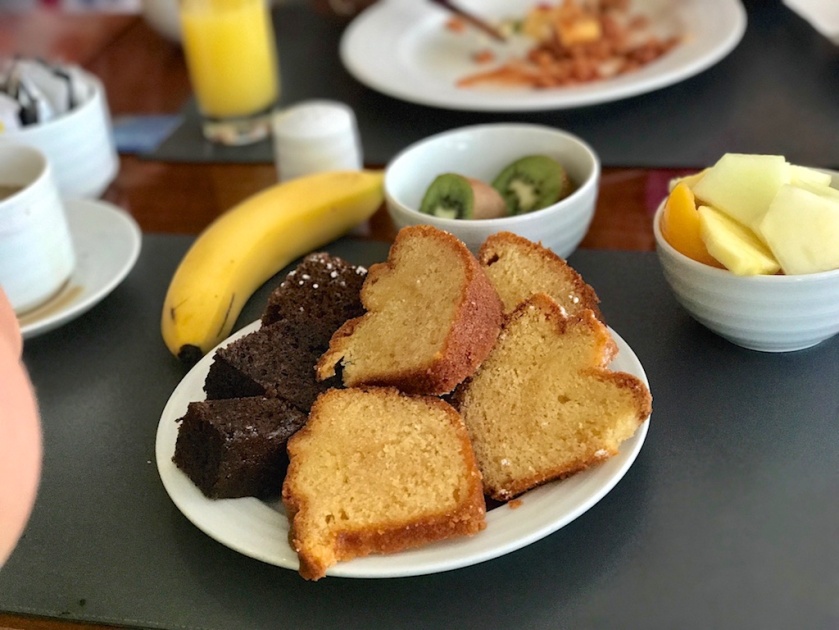 Our 4th day of golf was a brightly coloured anything goes day!  One guy came up to us on the course and said we were the most colourful and best dressed 4 ball he had ever seen! 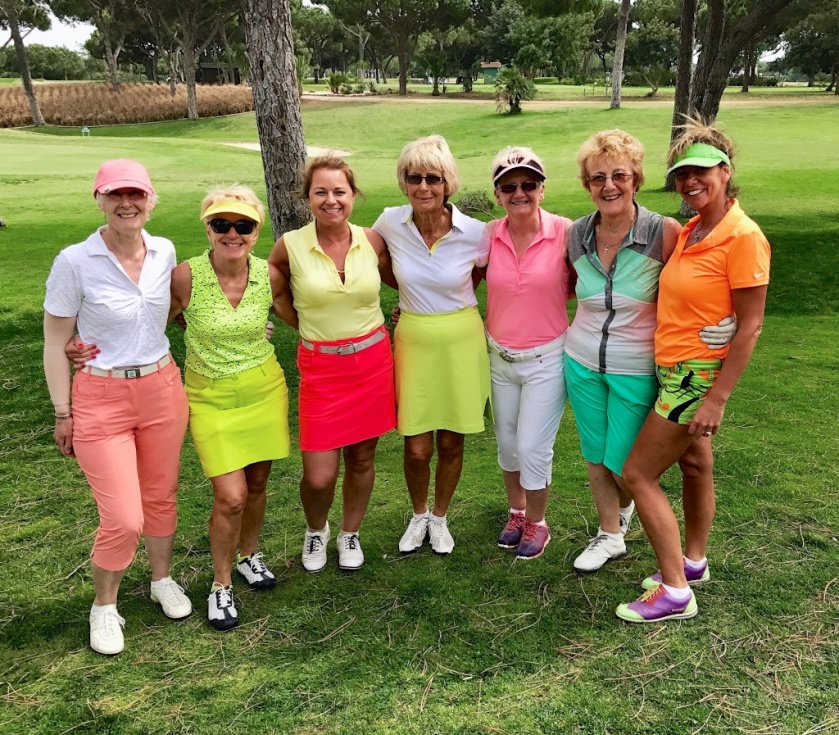 And our last day was a flower power day.  Do you recognise the shorts? My simplicity 1696 trousers that I made last year….

A little first aid was needed for Trixie….I wondered why they asked me to go on the trip! Luckily this was before we played and her feet weren’t too smelly!  (Sorry Trixie xx) 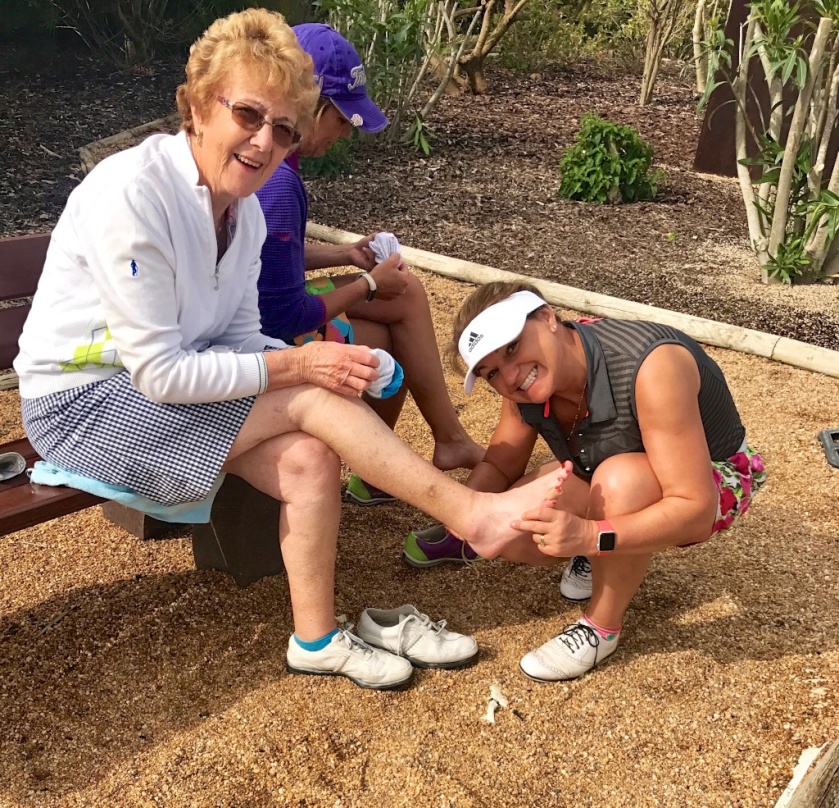 Did I mention that I had to wear the losers sash twice!?  Well I did and I wasn’t impressed, so on the night before our last round I took things easy, only had 3 glasses of wine and was asleep before 1am.  And guess what?  I won!!!!!!

The next day it was time for home……….here’s Tiggles and Taffy on their balcony all packed and ready for home, and feeling sad even though we’re smiling… 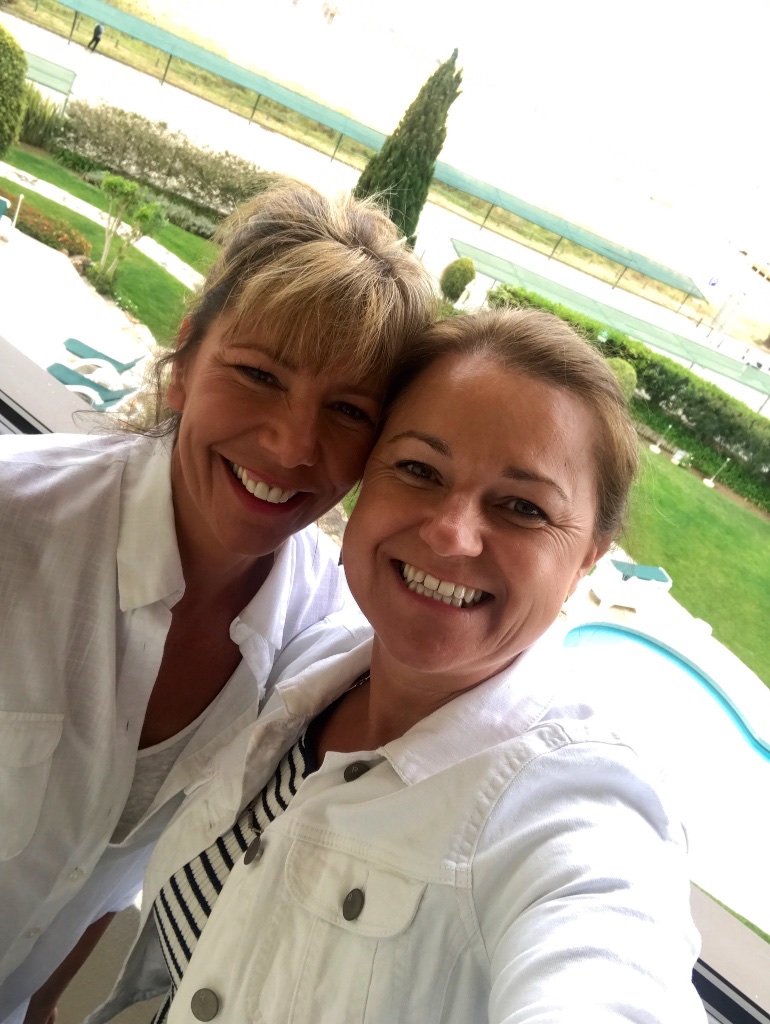 And then all the tired pussies got the plane home…..

And just one more holiday pic before I move on.  Earlier I mentioned I’d lost 20 pounds since I went last year.  Here’s me last year and wearing the same top this year, not quite as snug! I’m so glad I joined slimming world, I feel fab and have never eaten so much. (but unfortunately not cake! except in Portugal!) 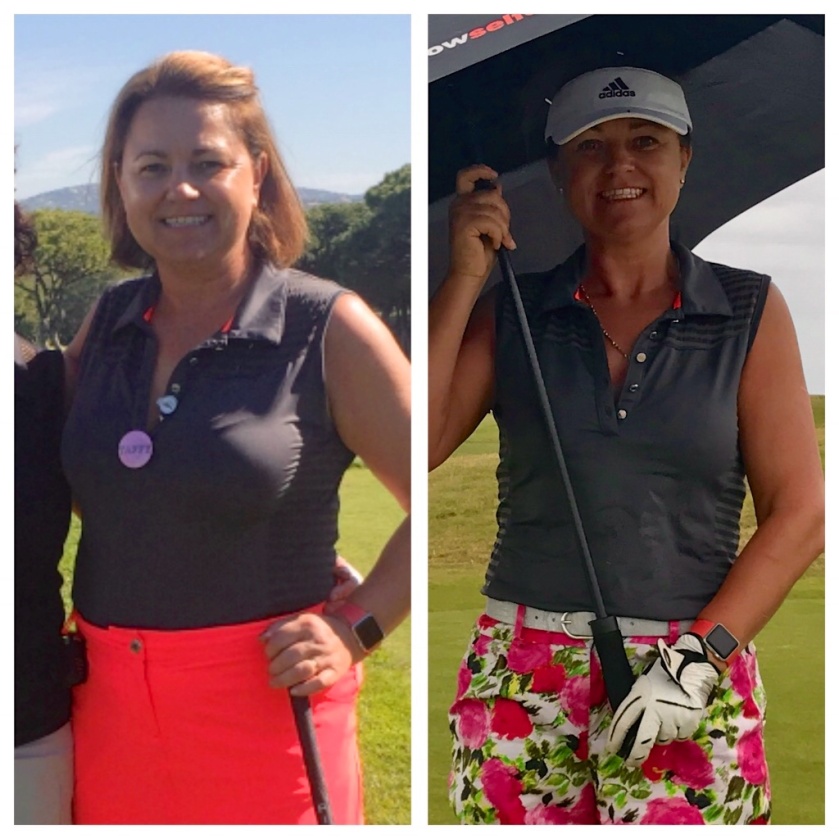 So then it was back home to the central heating and tonnes of washing.  H and hubby had been really good – my car had been washed, they’d kept the house tidy and the fridge was full of food!  I think I’ll go away more often!

I arrived home at 5:15pm, had a quick bite to eat, then dashed to parents evening (H’s teachers think he’s as wonderful as me!) and then dashed to watch H play cricket.  It was hail stoning as I left school, but somehow the storm managed to bypass the ground in Huddersfield were he was playing.

And then today I played in the Bradford and District Evening League Team Championship and we only went won!!  This league has been running since 1984 and we play other clubs throughout the summer.  At the start of the summer we have a team event and scores are combined.  This is only the second time in 33 years that our club has even won it so we were over the moon!! 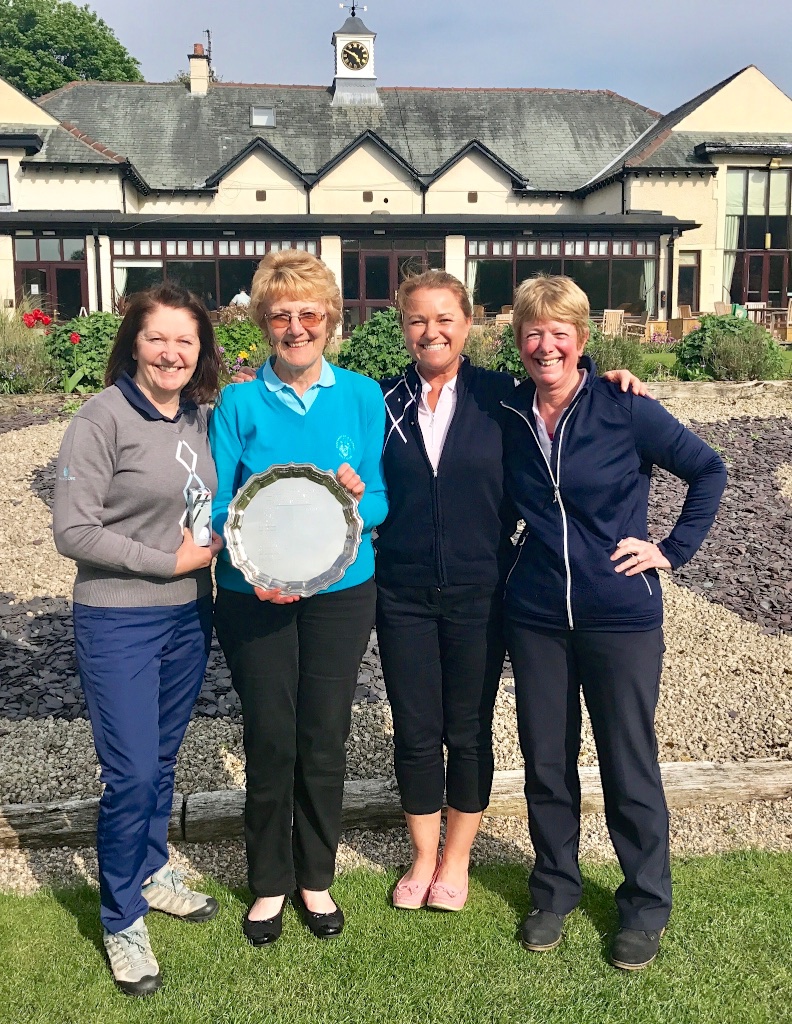 And just one last one.  A crocodile on the course at Shipley today!! 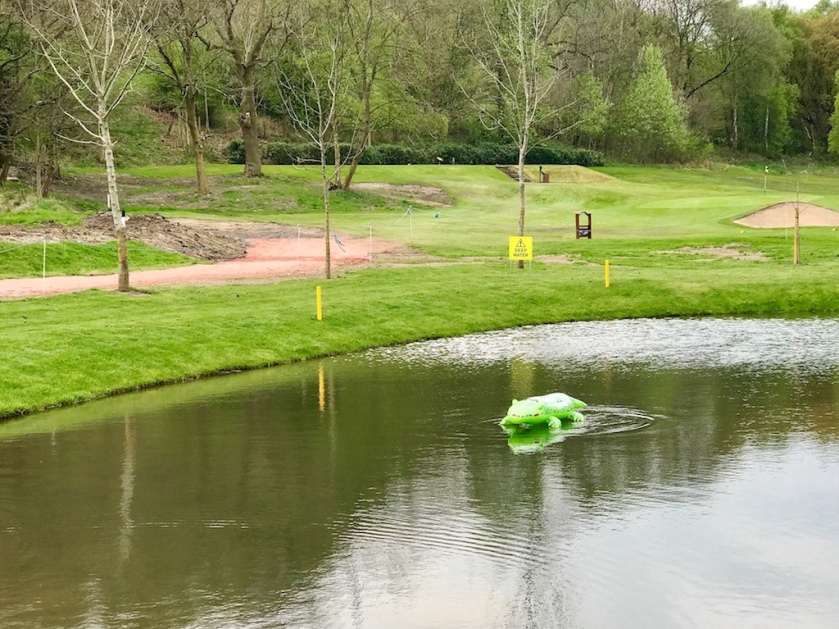 And before I go, the ‘feature’ pic is Helen wearing her fab new dress that she made!!  I’ve forgotten which pattern it is but it was one of the free ones that came with a recent Love sewing magazine.  I’ll find out before I add it to my talented friends page.

Sunday Sevens – a series devised by the lovely Natalie (how could she be anything else she’s a Yorkshire lass!!) from Threads and Bobbins.  Join in and share a bit of what goes on in your life outside the sewing room!!